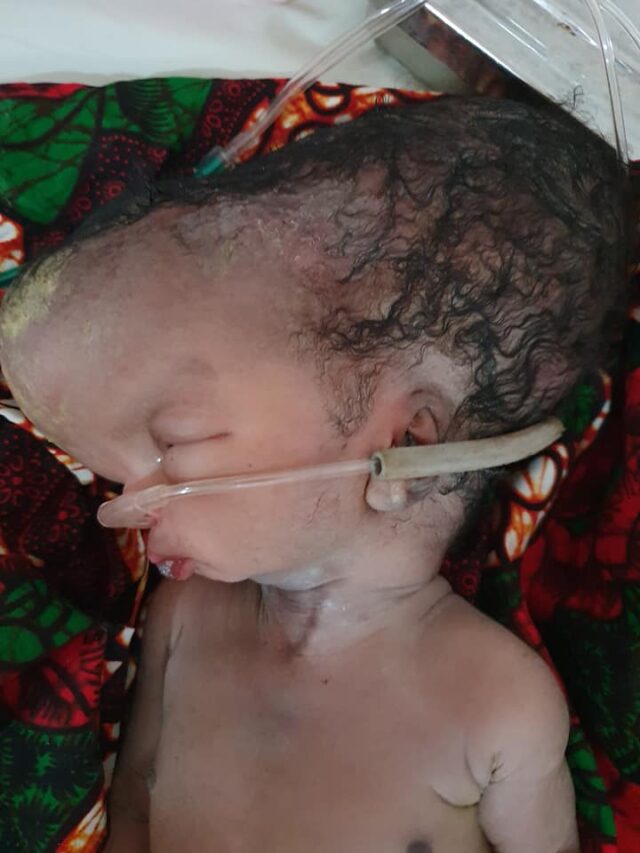 Doctors Plead for Help of an abandoned Child at Sacleapea Hospital

Due to abnormal head size, a five-month-old infant has been abandoned at the Sacleapea Comprehensive Health Center in Nimba County, Liberia.

The Stage Media has not seen any medical report to confirm what has happened to the infant but Macrocephaly is the term for an unusually large head. An infant with macrocephaly will have a larger head than most other infants of the same age and sex. In many cases, this condition is benign or harmless. In other cases, it may indicate an underlying medical condition, such as a genetic syndrome or a brain tumour.

The child was born through C-section because of the abnormal head size; when the mother recovered and saw her baby, she became depressed as she cried “this can’t be my baby”.

The doctor who carried out the surgery, Dr. Emmanuel D. Lah said that they nearly lost the mother of the child during the period of the surgery.

He explained to TSM that following successful surgery, the mother of the infant ran away after recovery thus leaving the child at the hospital.

“The child needs urgent medical care so we are therefore calling out to humanitarian organizations and individuals to kindly help this child seek advance medical care.

It is because of this condition he should be abandoned; he is a human who has the right to life and needs urgent care,” Dr. Lah said.

“The child is presently at the Sacleapea Comprehensive Health Center and needs to be brought to the John F. Kennedy hospital in Monrovia for specialized doctors and pediatrician to examine and come up with ways of saving his life.” He continued.

He wrote on his social media page “To All This May Concern: I present a 5 months old infant (“A.K.A Little Dr. Lah) who was born to an 18 years old female on March 16, 2021with Hydrocephalus.

The child was labelled as a bad omen and a wizard by the family and other village dwellers from the village the family hails from and was rejected by his parents and other relatives. All efforts by the social worker to counsel and educate the parents to accept the little child proved futile.
“
The child was abandoned at the facility (thanks be to God because surely, they would have killed him). The hospital has since been catering to him up to now. He is growing well and meeting good milestones.
Thanks to the OB clinician (Naomi Lewis and the midwives who have been taking care of him.
“Little Dr. Lah is five months now. But owing to his condition, he is constantly developing pressure sores on his head exposing him to infections. And at his age, it is almost impossible for him to sit up.
“Dr. Alvin Nah Doe Sr. and the JFK Administration have offered to help “Little Dr. Lah” with a Shunt; (A neurosurgical procedure to drain the fluid from his head). JFK is offering all the medical services free for “Little Dr. Lah”.
But all other expenses relating to his transport, upkeep and other basic needs are still needed. And even after the surgical procedure, he will still need help to survive.
We are therefore calling on anyone who feels touched by “Little Dr. Lah’s” condition to please help meet his non-medical financial needs.
“Anyone wishing to help can do so through Naomi Lewis (OB clinician/caregiver) by mobile money on 08886475958.
Little Dr. Lah is on formula feed currently (NAN 2 and Rice Cereal). Donations in kind will also be highly appreciated.
“Little Dr. Lah is human-like anyone and has the right to live and grow in an environment where he will be accepted and loved.”

Speaking to Dr. Alvin Nah Doe from the John F. Kennedy hospital, he said that the only way forward is for the child to be transported to Monrovia to get urgent care.

Other family members said the child is cursed because of his mother being disrespectful to older people in their village.