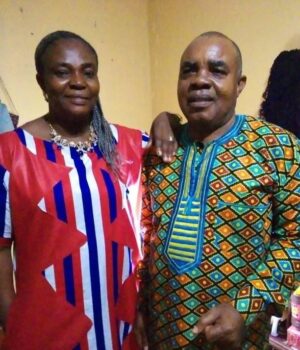 In recent months, like other Arabic countries, specifically Oman, Dubai has been in the news for the wrong reason, mainly for trafficking Africans, including women and girls, with a handful of men falling prey to labor without pay.

These survivors who have been trafficked over the past time are forced into domestic work without salaries or suffer all forms of abuse at the hands of those who have reportedly “bought them.”

Many of those agents Prey on those who trust them (agents) and believe that they will get a well-paid job overseas to have better living conditions for their families back home.

The Stage Media (TSM) investigation has uncovered a ”Bishop and General Overseer of the Liberation International ministries located in Gardnerville, Supper-Market who reportedly trafficked one of his church’s deacons to Dubai.

John Johnson (not his real name) is one of the few men who have experienced the lousy voyage to Dubai.

The survivor alleged that he was defrauded by his ”Bishop” Williams Innocent, who convinced him that the church had chosen him to travel and work aboard due to his committed service to the House of God.

According to him, “I was deceived and sent to Dubai where I faced torture, humiliations, disgraced, and starved without proper food for months, something which resulted in me sleeping in the streets of Dubai along with other boys who had to labor during the day to get daily meals.”

John said those boys were trafficked survivors in Dubai who managed to escape from their enslavers just like he did.

With teary eyes, John said, “after my years of dedication and services to the Ministries, Bishop William Innocent assured me of an opportunity that one of his spiritual sons was offering a job that could serve as a lifesaving redemption for my family and me something I fall for it and not knowing that I had placed myself in harm ways.”

He informed TSM, “it was Bishop Innocent who processed my traveling documents with hopes of a better life in the Arab Republic of Dubai.

“Bishop Innocent told me that I was going to earn US$850.00 as salary for my work, but when I arrived in Dubai, it was a whole different story; besides, at the airport in Dubai, I was asked by two men to give my food and rent money before leaving the airport, I was shocked,” Johnson told TSM reporter.

Frustrated, John told TSM, “After months of stay in the Arab nations as a family man, I could not work to earn the sum of US$850, which was contrary to what my own Bishop told me.”

John disclosed that before he departed Liberia on October 10, 2021, he was working as a professional heavy-duty mechanic on the farm of Businessman Benoni Urey.

“As a professional Heavy Duty Mechanic, it was almost impossible for me to get a job because my passport and other important travel documents were seized, which also impeded my movement,” he revealed.

Not the only Survivor

“I am not the only victim of this pastor fraud,” John told TSM, “I know of five other persons whom Bishop Innocent helped to process their documents to travel to Dubai with the same hope of earning something tangible to better their lives and that of their family which turned out to be the contrary like mine.”

He continued, “Some of those individuals have to struggle and manage to cross over to another country while some are still in Dubai as we speak.”

While in Dubai, the survivor alleged that he managed to place a call to Bishop Innocent, informing him of the challenges, torture, and disgrace he was undergoing. Still, Bishop Innocent did not help the situation.

“Bishop Innocent said I am not educated, that is why I wanted to damage the opportunity, he said why will I go to heaven and want to come back to hell, and that I should find a wheelbarrow work to do instead of crying around town,” said Johnson.

“I am yet to understand why Bishop Innocent Church will choose to maltreat me when I paid my tithes and contributions to the development of the church. My family is dedicated to the work of that Ministry,” he explained.

He added, “Upon my return in June 2022, I confronted Bishop Innocent on the issue, but he said he has nothing to do with me as it was my negligence to have left heaven for hell.

John’s allegations were confirmed by his Mother-in-Law Lorpu Kollie (not her real name), who explained that her son-in-law Johnson departed Liberia on October 10, 2021, Via the Roberts International Airport.

“I was excited upon hearing that my son-in-law was one of those chosen by the Bishop to travel to Dubai to work because of his dedication and commitment to the ministries,” Johnson’s mother-in-law narrated.

She added, “I got highly disappointed, heartbroken, ashamed, and frustrated when John returned to Liberia with his physical look being contrary to what we, (family) expected.”

Innocent admitted to his role in processing the survivor and other members of his church document to travel to Dubai for greener pastures and better living conditions.

He, however, refuted the claim that he trafficked a member of his church, adding that “it is not trafficking as being alleged by the survivor and some members of the ministry.”

Innocent told TSM via phone interview that he has provided members of his congregation, including the survivor, an opportunity to improve their lives.

“My spiritual son who is residing in Dubai over time has provided an opportunity for members of my ministry to travel and work in Dubai, but not based on human trafficking as they are putting it,” Innocent noted.

Innocent argued that he did not commit any act of trafficking as it has been speculated by the survivor and other relatives, noting, “this is the matter of helping the poor and members of the religious community.”

“When the young man returned, I spoke with him twice, and so did my wife, but since then, I am yet to see him in the church,” he said.

Innocent said, “I have fully been involved with the human capacity development of my members, and that was the same opportunity that I provided the young man.”

The Bishop further justified that it was not only John who when on said trip, stating, “they were two that went on this trip, and the other lady is still there.”

Caroline Innocent, the wife of the Bishop, resisted that her husband was not involved in trafficking.

When the TSM reporter placed a call to the Bishop for further questioning after several visits to the church, she intercepted the call on the grounds that her husband was ”ill” and did not have the strength to have a conversation.

Caroline told the TSM reporter that she is aware that some church members were afforded the chance to travel to Dubai to help themselves, an opportunity she said many of the church members have benefited from.

“Hello, my Brother, my husband is not well. That is while I intercepted the call,” She told the TSM reporter, “but as far I am concerned, there has been no one trafficked from our church, but this is something that we need to sit and talk about.”

TSM has visited the church to afford Caroline and answered further questions as promised, but every effort has failed. At the same time, when there were follow-up calls placed to her by our reporter, she since refused to answer.

Is Vaccinating with Bare Hands Acceptable?

False, This Acrobat is not Liberian

President George Weah Claim, “This Gov’t Has Done More in 3-Years than other Administration”...