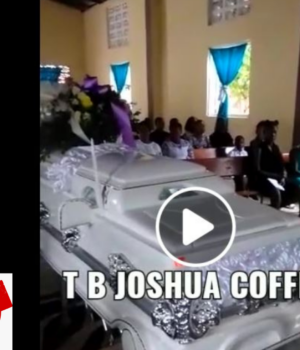 Following the announcement of the death of the televangelist and founder of the Synagogue Church of All Nations (SCOAN), Prophet Temitope Joshua (popularly known as T.B Joshua) June 5, Saturday, several false claims about him have surfaced.

TB Joshua, considered one of Africa’s most influential and controversial preachers, is reported to have passed away on the way to the hospital after a church service.

In this fact-check report, we tackle three of the viral claims we have seen.

The videos have attracted several reactions from social media users.

Though SCOAN has announced that the funeral will begin on July 5, it is safe to say that the church has not unveiled the coffin of TB Joshua and the videos are Fake.

The family quoted by the  BBC   and the Herald said the televangelist will be buried in Lagos.

Another photo and video shared hundreds of times on Facebook and YouTube claim to show the American cable news channel CNN broadcasting ‘the mysterious angel appearance’ at the supposed funeral of T. B. Joshua. It said Joshua had been secretly buried, and the angel sighted was “dangling from the roof”.

A Fact Check by All News Nigeria debunked the publication.

Dubawa used the Reverse image- Yandex and traced the image to the funeral service of Pastor Dare Adeboye, son of Pastor Enoch Adeboye of Redeemed Christian Church of God [RCCG] who died on 4 May.

Though the video carried a CNN logo with a headline, the image is doctored.

The American News outlet CNN did not publish such a story. Also, TB Joshua has not yet been buried contrary to the claim that he was buried in Arigidi, Akoko Ekare.

A story published by the BBC  states that he will be buried inside SCOAN church headquarters, Lagos.

A YouTube video claims TB Joshua’s coffin has healed a woman of cancer.

“Hello friend and welcome to another interesting video in our channel.   TB Joshua Coffin heals Woman sick of Cancer for 6years. Family in tears 😭😳 Thanks so much for stopping by and watching the video till the end. Please you can as well hit the like button immediately after watching the video , followed by hitting the subscribe button and the bell icon so that you don’t miss out in our next video. We greatly appreciate your efforts may God bless you,” the caption of the video reads.

According to the family of the deceased pastor, the funeral of TB Joshua will begin on July 5. It is therefore impossible for the supposed healing to have happened.

The televangelist’s coffin has not cured a woman of cancer.

13 Years After, Plastic Alcoholic Beverage Returns to the Liberian Market

Google is not Giving Out Gifts, The WhatsApp Message is False