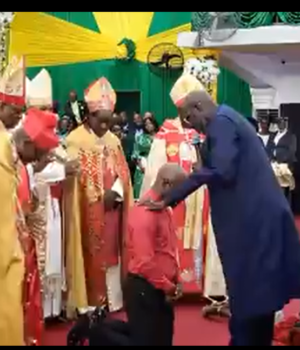 If you only have a few seconds, read these lines:

–    That both Bishop Johnson and President Weah do not have
a good relationship though the pair are foster brothers.

–    The consecration ceremony was used to unified Bishop Johnson and President Weah.

On
Sunday April 24, at the Restoration Baptist Church, there was an array of
bishopric members who attended the coronation of the General Overseer of the
church; Joseph Gardea Johnson.

The
program brought together state and non-state actors but what has been
interesting is an image of the fierce prelate kneeling before Liberia’s
President George Weah; some critics have said it was a wrong decision for the
prelate.

Social
media circulated the image with claims that the Baptist Bishop was anointed and
ordained by Weah who; he (Johnson) has blame for poor governance since his
ascendency to power in 2018.

Though
a chair was brought by an usher, the archbishop asked Bishop Johnson to kneel
to allow President Weah touch him.

President
Weah then made a brief remark,” I am glad to be here and, I want to thank the
Vice President for inviting me. She has giving me the task.”

“God is
the ultimate, through your wisdom by the grace of God on me to touch my foster
brother, we pray that my foster brother will do the work of God.”

President
Weah touched the shoulders of Bishop Johnson and then his head.

Later,
an exchange between first lady Clar Weah and President Weah, the president
immediately then touched Bishop Johnson’s shoulders only.

President
was asked to present the newly bishop to the congregation and hand him a sword.

During
the speech of Bishop Johnson, President Weah was not present.

He said
“My focus is to fight for Liberians even at the detriment of my wife.”

“I will
do my best until Liberians get what they so desire, all you can do for me is to
pray for me.”

When
the image circulated on social media, TSM contacted Bishop Johnson, he said
archbishop Jatau knew there is a conflict between the pair.

“Knowing
that we have conflict, was not the right place to reconcile, but that does not
change me, I will remain fierce less than before.

He
furthers that he had no knowledge that President Weah was gracing the occasion.

“I was
preparing for service when my security guard informed me that there were
security guys in the church’ yard who said the president was attending.”

What Is and Isn’t in SONA on Road Construction

No, LPRC Building Is Not The First Administrative Construction Own By The Entity