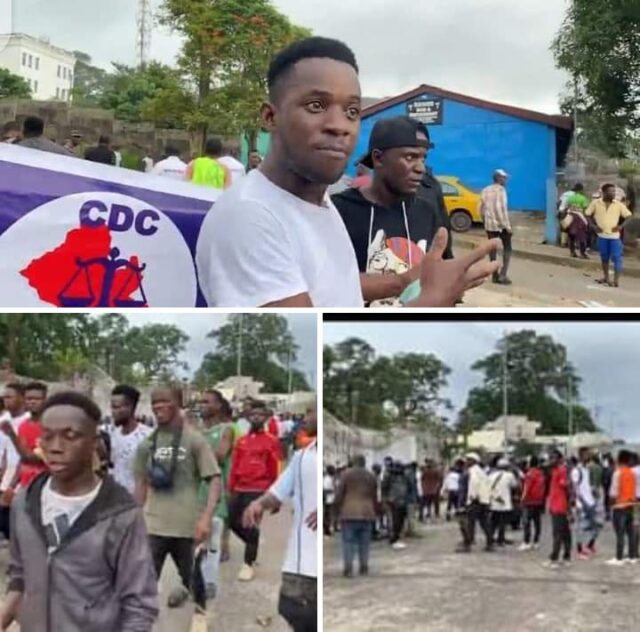 What was meant to be a peaceful demonstration on Liberia’s 175th Independence Day celebration turned violent after a pro-government group, the Coalition for Democratic Change (CDC) Council of Patriots (COP), brutalized a student of the state-run campus-based political party, The Vanguard Student Unification Party (SUP).

The incident occurred early on Tuesday, July 26, 2022, after the students decided to stage a protest before the United States Embassy in Monrovia. Among other things, the students asked the government to fix the country, a tagline that has become popular for many anti-government protesters.

The violence is a drawback for the country’s fledgling democracy, something DUBAWA is concerned about and has taken an interest in understanding vis-a-vis causes of the violence, the groups associated with it, and what can be done to avoid such violence in the future.

The Coalition and Patriots Marriage

The Coalition for Democratic Change Council of Patriots (CDC CoP) is a breakaway group from what used to be the Council of Patriots, an anti-government organization that was vehement in its opposition to the ruling government. Since breaking away and joining forces with the governing party, it has spared no effort backing all government projects and activities.

The violence witnessed on July 26 appears to be a by-product of this new political marriage in which the breakaway members of the Council Patriots underlined their steadfast allegiance to the Coalition of Democratic Change. In the process, some members of The Vanguard Student Unification Party (SUP) became victims of the violent attacks.

The members of Vanguard Student Unification Party (SUP) were angry over what they said was the rising cost of living in Liberia, the rising state of insecurity, and a weak educational system.

Food prices have soared, owing largely to hikes in gasoline, which is now selling at US$5.66 (L$875), up from US$5.00 (L$750). As a result, transportation fares have increased, thus triggering agitations by some commercial drivers, bike and tricycle (Kehkeh) riders, and other citizens in the country.

There have also been a series of deaths in the country, raising questions about insecurity. In a recent conversation, it was so severe that the President charged Liberians to install CCTV for their protection. The Minister of State for Presidential Affairs, Nathaniel McGill, was also on record saying that the government is considering making the installation of CCTV mandatory in the country, as reported by the government-owned news outlet, The Liberia News Agency (LINA).

These comments angered a section of the citizens, including members of the SUP. They were also not happy with the results of Liberian students in the WASSCE exams, even though the Weah administration shouldered the cost of taking the West African Senior School Certificate Examinations (WASSCE) for all senior students in the country.

For these reasons and many others, the protestors first hit the streets on July 26, first to the US Embassy in Liberia to hand over their petition.

Why the US Embassy?

Per Article 41 of the Vienna Convention, Heads of Missions have a duty not to interfere with the internal activities of a host country. However, in Liberia, the angry protesters say they had lost confidence in the Weah-led administration so much that they did not even trust him to listen to their grievances. Instead, they believed the US Embassy could engage the Weah administration better, hence their decision to petition the US Embassy.

On the day of the demonstration, the students who had decided to converge on campus before making their way to the US Embassy in Monrovia changed their plan by moving straight to the Embassy.

At the US Embassy, located at the top of Benson Street in central Monrovia, the students waved placards with inscriptions “fix the country” while chanting anti-government slogans. This did not go well with the Coalition of Democratic Change Council of Patriots (CDC CoP), who embarked on a counter-protest.

Checks by DUBAWA  indicate that as early as 6:00 am that fateful Tuesday morning, the CDC-CoP, besieged the headquarters of the campus-based political party, SUP, on the Capitol Hill campus of the University of Liberia, hoping to find the students there. Seeing nobody, the CDC-CoP members moved to the US Embassy wearing white t-shirts with the words, “George Weah is fixing the country.

There was chaos shortly after, with the pro-government supporters chasing and pelting the anti-government supporters with stones. This would later turn bloody with injuries to several students, one of them critical. The victim, Christopher Walter Sisulu Sivili, was brutalized in the full glare of the camera. He was hospitalized in Liberia for some days but has since been flown out of the country to seek medical attention.

This attack has received widespread condemnation by multiple stakeholders in Liberia.

He has since directed the Inspector General of Police to investigate the attacks.

The lawsuit against aggressors?

Even before the IGP began investigations into the matter, the Council of Patriots (CoP) had sworn to take legal action against the group that attacked the SUP.

The Secretary General of the group, Joseph K. Vallai, disclosed that the organization would institute a 1.5million lawsuit against the abusers of the victim to ensure that he gets justice.

“What happened on July 26 of this year was a complete crackdown on civil liberty and abuse of human rights in public square and this cannot be a CDC-CoP thing, because was an attack on post war Liberia’s democracy,” he noted.

Explaining why some members broke away from the group, Mr. Vallai stated the aggrieved persons were suspended for acts of insubordination. For that reason, they decided to join the governing party.

He said the Council of Patriots was established to hold the Weah administration accountable to the people and will need committed members to do that.

Since its formation in 2019, the group has had a series of protests in the country, including the famous June 7, 2019 protest under the theme: “Save the State.” It is regarded as Liberia’s biggest post-war protest.

DUBAWA contacted the General Secretary of the Student Unification Party (SUP), Jusu Kamara, to find out his thoughts about the demonstration and the attacks.

“We were calling on the George Weah administration to fix the educational sector of this country and the kangaroo justice system. We were also calling on him to act on the Liberia Anti-Corruption Commission (LACC) reports which fingered several government officials and institutions, including the Liberia Water and Sewer Corporation (LWSC) the Ministry of Agriculture (MOA) and the Liberia Institute for Statistics and Geo-Information Services (LISGIS) for acts of corruption,” he stated.

Kamara condemned the attack on the students during their demonstration. Meanwhile, the campus-based political party has vowed to come out in their numbers to stage another protest until the George Weah-led government listens to their calls.

On their part, though, members of the Coalition for Democratic Change have dismissed the allegations of violence against them. According to the group’s chairman, Ben Believe Togbah Jnr, they did not organize any violent protest as was reported. Speaking on OKAY FM, which was transmitted live on the station’s official Facebook Page, Mr. Togbah Jnr denied accusations of counter-demonstration and violent attacks on the SUP.

According to him, they had gone to show gratitude to President Weah for the many developmental initiatives undertaken since becoming President. Still, they encountered hostile members of the Student Unification Party (SUP), some of whom were throwing rocks and wielding deadly weapons, an allegation that DUBAWA cannot independently verify.

What does Civil Society think About Demonstrations?

The Executive Director of the Center For Media Studies & Peace Building (CEMESP), Malcolm W. Joseph, has condemned the violent demonstrations. He told DUBAWA that Article 17 of the Liberian constitution spells out the right for every Liberian to assemble at all times freely but in an orderly manner.

He is convinced that notifying the government before a demonstration is necessary to ensure the safety of the demonstrators but was quick to throw in a word of caution.