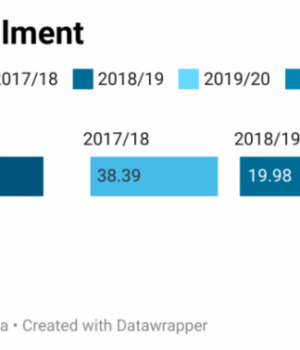 As President
George addresses the nation on Monday January 24, we fact-check his
claim that the University of Liberia enrollment has increased from 8,000-
18,000 students.

There is an ongoing free- tuition policy for state owned universities and
colleges.

“We are encouraged by the impact of our free tuition policy for state-owned universities and colleges.
For example, since the implementation of this policy, we have seen enrolment at the University of Liberia more than doubled, from 8,000 students to 18,000 students. “

At the same time, Minister of State for Presidential Affair Nathaniel McGill has made similar claim.

“The University of Liberia enrollment during the past administration was 6-8000 but Since we took office the current enrollment is 18-19,000.”

The Stage Media requested the administration of the University of Liberia through the Freedom of Information (FOI) to provide the enrollment details.

Our request generated information from 2014 enrollment to 2020/2021 first semester.

After the declaration of the policy in 2018 there was a huge climb of enrollment at the University of Liberia with the enrollment of 38,391

See the table below

No, MTN is not giving Valentine’ Gifts