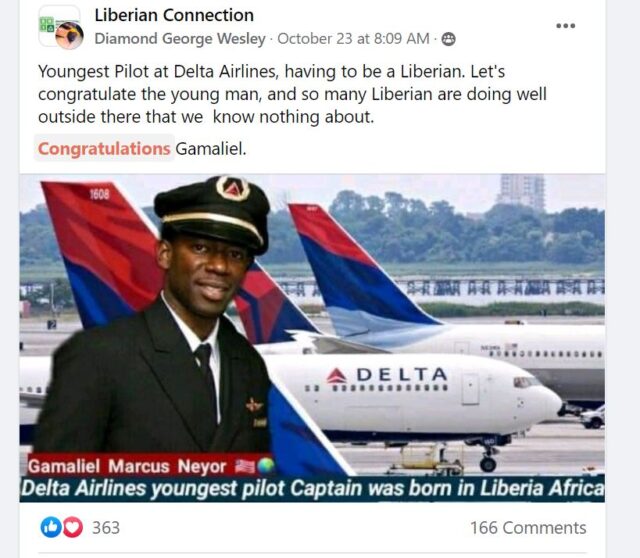 Claim: Youngest Pilot at Delta Airlines, having to be a Liberian. Let’s congratulate the young man, and so many Liberian are doing well outside there that we know nothing about. Congratulations Gamaliel.

Verdict: True, But: Gamaliel Marcus Neyor was named as the youngest pilot in 2017 but not in 2021.

The post that was published October 23, 2021, in a social media group named “Liberian Connection attracted 179 comments.

Gamaliel Marcus Neyor is the son of Christopher Neyor, former president of National Oil Company of Liberia (NOCAL) graduated from South-Eastern Oklahoma State University in the United States in aviation.

As the youngest captain at Delta Airlines, Neyor says his success stems from timing, luck and being responsive to opportunities when they present themselves.

Verification: The CGTN  and All Africa publication on April 27, 2017 states that Neyor was 31 years when he was named as the emerging youngest pilot.

Conclusion:  It is True that Gamaliel Marcus Neyor was named the youngest pilot of Delta Airline BUT that was four years ago specifically in 2017 and not in 2021 as claimed in the Facebook post