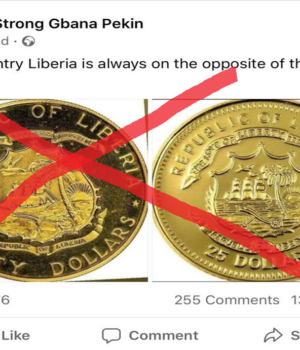 Claim: “The government through the Central Bank of (CBL) has minted coins in the L$25 and L$30 denominations,” according to a Facebook user.

Verdict: The Central Bank of Liberia says it only minting coins in L$5 and L$10 denominations.

Liberia seems to be returning to the pre-war era where Liberians used coins for business transactions and as legal tender. In 1847 and 1862, copper 1 and 2 cents coins were issued and were the only Liberian coins until 1896, when a full coinage consisting of 1, 2, 10, 25 and 50 cents coins were introduced. The last issues were made in 1906.

In accordance with Article 34(d) of the Liberian constitution, the Liberian legislature mandated the Central Bank of Liberia to print new currency and mint coins in the country.

Article 34(d) states that the legislature shall have the power, among other things, “to levy taxes, duties, imports, exercise and other revenues, to borrow money, issue currency, mint coins, and to make appropriations for the fiscal governance of the Republic.”

It is upon this reliance, the Liberian legislature, on May 6, 2021, signed and issued a joint resolution (Resolution #001/2021) authorizing the Central Bank of Liberia to print and mint the new family of Liberian currency to the tone of L$48 billion

The legislature’s decision was informed by the Counsel from the Economic Management Team (EMT) of the country falling shortages of Liberian dollar notes on the market. There is also a huge quantity of mutilated banknotes and the scarcity of smaller denominations like L$5, L$10 and L$20 Liberian banknotes on the market.

This new currency is expected to be printed and minted within a three-year period beginning in 2021, 2022 and 2024. The year  2023 was skipped because, according to the legislature, it is the election year.

There have been occasions where taxi drivers, tricycles (kehkeh), and motorbike riders and passengers get into confrontations over lack of change or when there is disagreement over mutilated currency as change or transport fares.

It is to solve these challenges that the Liberia Legislature in March of 2021, granted authorization to the CBL for the printing and minting of new family of Liberian currency.

Following the authorization, the CBL, in December of 2021 printed and brought into the country the first consignment of newly printed Liberian dollar banknotes so as to help ease the problems during the festive season CBL.

Despite the chronology of the events, there has been news of the arrival of the new family of banknotes and minted coins in the country with some Liberians taking to their social media (Facebook) pages with claims of what they believe is the image of the newly minted coins.

Among the many posts on social media (Facebook) was  Liberia’s famous social media giant based in Canada, Varney A Teah who goes by the Facebook name “Strong Gbana Pekin.”

This post by Strong Gbana Pekin generated over 250 comments, 13 shares and over 270 emojis.

Due to the seriousness of the currency situation in the country, DUBAWA embarked on an investigative venture to ascertain the facts surrounding the various posts flooding social media (Facebook) in recent times as can be seen here and here.

DUBAWA first decided to look at the authorization granted the CBL to print banknotes and mint coins, by the Liberian Legislature “Resolution #001/2021” and resolution is found on page 18 and 19 of the CBL annual report 2021.

DUBAWA went further by contacting one of the officials at the CBL Atty. Alphonso Zeon to provide explanation for the various claims on Facebook about the new 30 Liberian dollars and 25 Liberian dollars minted coins.

Mr. Alponson Zeon insisted there were no 30 or 25 Liberian dollar minted coins as can be seen in the WhatsApp conversation below.

DUBAWA also contacted the Head of Communication at the CBL, Mr. Cyrus Wleh Badio, who told us that the various claims on Facebook are false.

Mr. Cyrus Wleh Badio indicated that the news trending on Facebook about the bank minting 25 and 30 Liberian dollars coins are fabricated and far from the truth as can be seen again in the WhatsApp conversation below.

A release has, however, been issued by the Ministry of Information Cultural Affairs & Tourism (MICAT) clarifying the numerous Facebook posts.

This statement was also published on the government-run media outlet, The New Liber Newspaper as well as on Liberia Ministry of Information Facebook page.

Investigation by DUBAWA into social media (Facebook) posts suggests that speculations that the CBL has minted L$25 and L$30 coins are false. The CBL has clarified that it has only minted L$5 and L$10 in coins contrary to the many Facebook posts.

Railway season ticket holders and commuters will see a 1.6% rise in fares from...