“Now, a journalist has to be a partisan of the current regime before he or she gets paid from the government, that is wrong, for some of us who don’t want to compromise the journalism profession, how do we survive in the wake of Covid?” -Henscin Dehgar, Truth FM

Liberia- When the Government of Liberia announced the outbreak of Covid-19, journalists went beyond the intensity of reporting on the virus in battling rumours that can spread quickly and widely during a health emergency.

Nevertheless, without any protective gear, media personnel went on the field telling stories of survivors, health workers and government officials.

The Government of Liberia issued Covid passes to some journalists denying others, but the Press Union of Liberia rejected the passes because it was on a selective basis.

While thousands of employees work from home during the pandemic, journalists in Liberia had no other choice but to head into their studios, newsrooms or out to the field to report.

The media in Liberia is heavily surviving on an advertisement from either government offices or NGOs and in early March of this year when Covid-19 was declared, businesses were low, and some journalists currently have not been paid by media houses.

The journalists and media managers in an interview expressed their frustrations of not being supported during the coronavirus pandemic by the government of Liberia, International partners, and foreign missions in the country.

According to them, since the country was lockdown for three months (March-May), businesses were not coming over to them; something they said caused them to be financially strangulated to the extent that they empty their saving accounts to keep feeding the public with Covid-19 related information.

“We did not receive any Covid-19 assistance from the government of Liberia, or International partners within or out of the country, but we were still reporting on covid-19 issues even when our institutions were in total financial breakdowns and perishing in our hands”, they said in gloomy tones,

Speaking to The Stage Media (TSM), the Publisher of the New Dawn Newspaper, Othello Garblah said though his institution wrote several proposals to non-governmental institutions, none was accepted; adding that ads published before and during Covid has not been paid for by some institution.

According to Garblah who is also the head of the Publisher Association Liberia, his paper which is a daily published, bilingual with both French and English, and has been running for over 10 years was depending only on money that was generated from the sales of the paper, something which he said made their work tedious.

“Imagine we have printing machines that are to be regularly serviced, and we had to pay most of our staff who had to go home for one month when we didn’t have any extra aid, or funding coming from anywhere”, he mentioned.

Speaking also, Henscin Dehgar who is a Sub-editor, Program Producer, Newscaster, and Roaming Reporter of Renaissance Communications Incorporated\Truth FM said, like many other media institutions, his institution is yet to receive covid-19 assistance from the international body despite the many breakdowns the virus has imposed.

According to Dehgar, he runs a 30 minutes radio program tagged, “The Covid-19 Awareness Program” that host the Ministry of Health (MOH), National Public Health Institute of Liberia (NPHIL), Center for Disease Control (CDC) among other health care providers that are sponsored by Internews Liberia, is yet to receive any Covid benefit.

“The international body especially, should see the need to aid the Liberian Media amid this pandemic, because even before the outbreak of this pandemic, I had a delayed salary of not more than $150USD, and whatever little I had saved, I have entered into it and recovering amid this pandemic seem so difficult,” Dehgar said.

The Liberian journalist who is also the founder of the Voice of Reporters stated that, because their institutions are not being supported during the pandemic, many volunteer journalists have declined in fear of coming in contact with the virus.

Randall Jackson, Chief Executive Officer (CEO) of the Kreative Mindz Television (KMTV), an online service media and Fabine Kwiah, Liberia Broadcasting System (LBS) who has worked for 11 years as a journalist and also a Court Reporter explained that their scope of operations was negatively affected, as most of their customers were lockdown.

“Things were already not too fine when it comes to the economy and this pandemic came to us and made an already bad situation worst; but again, we had to sacrifice because people are depending on us to provide happenings about the virus”, they added.

Ruth Brown, a journalist in Zwedru said it’s sometimes been more challenging to find sources during lockdowns. Sources often aren’t in their offices and can be harder to reach by email because you know the system.

Not a full-time employee of Flash, she said sometimes, she gets paid, and other times, there’s nothing to hope on.

“Reporting in the rural area is difficult especially when you’re in a rural community like I am,” she said. “During the pandemic that’s intensified even more, with physical and social distancing. Some of the emotional ups and downs are easier to navigate in a newsroom setting.”

Social media, specifically Facebook was her medium of contacting sources.

Celia Whin, Sinoe County said she was sent home during the height of Covid, I had just returned from Maternity leave and it was fun working in the newsroom, out of sudden I was asked to work from home.

“I do miss working in a newsroom. You run into people and share what you’re working on, and they have ideas and sources for you. Everybody’s a wealth of information,” she said. 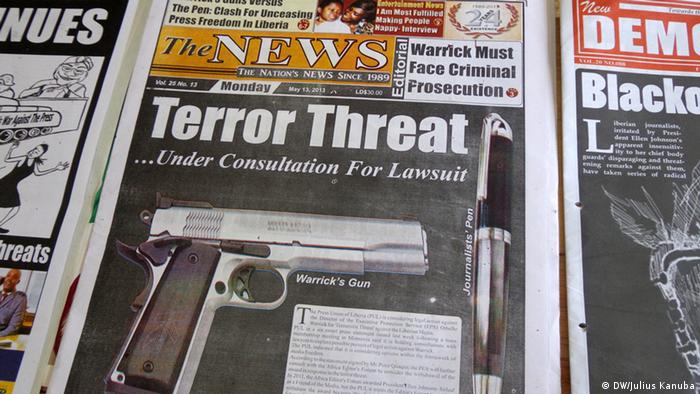 Speaking further, the Publisher of the New Dawn Newspaper, Othello Garblah, also said that the Government of Liberia tried to restrict the number of privately-owned media institutions covering Government press conferences on the crises.

According to Mr. Garblah, ‘the GOL did want the media to independently take the newsstand in reporting about the pandemic in the country, so some media houses were named to cover the Information Ministry Press Conference.

The Information Ministry is the mouthpiece of the Government.

Dehgar said Journalists were disenchantment with the Government because of the restriction placed on media practitioners who were independent in reporting on the crises.

He claimed that as a result of low funds, some media institutions had no choice but to surrender to the Government’s pressure.

“Now, a journalist has to be a partisan of the current regime before he or she gets paid from the government, that is wrong, for some of us who don’t want to compromise the profession, how do we survive in the wake of Covid?”

“The media in Liberia is dying because it is in the dungeon. The media in Liberia has no means of rising without aid from foreign partners. The GOL cannot be relied upon for aid, because all they do is to cause divisive broadcast through their financial influence”, Dehgar stressed.

The President of the West African Journalists Association (WAJA), Peter Quaqua has however noted that the lack of adequate support for the well-being of journalists is not only restricted to Liberia but all around the world.

According to Quaqua, former President of the Press Union of Liberia (PUL), journalists who are within the region, and across the globe are experiencing a similar problem, but the media in Liberia is more challenged because of the country’s economy.

“The environment in which a media institution operates, considering said environment’s economy, there will be a ripple down effect, but resolving our problem in Liberia should be our fight”, he urged the media community in Liberia.

Quaqua indicated that the Liberian media already had an existing problem with financial capacity before the outbreak, a situation he said has made the survivability of journalists in Liberia more difficult; adding that media managers should now seek to have a business plan to navigate through successful.

He furthered that media heads should reorganize themselves by considering their budget expenditures, and if the need is, a reduction can be done in production dates, staff can be given shifts because of the lack of budgetary allocations during this pandemic period.

Mr. Quaqua however called on media managers to confront and remind all those who they (media managers) have worked for over the past months and are reneging to pay.

“It is a difficult thing to function properly as a media entity especially during a crisis, and when you are not being paid for the ads that do for the GOL or Non-governmental Organizations they should be told of their debts”, he said.

For his part also, the (CEO) of the KMTV Liberia, Jackson however encouraged his fellow media managers not to be discouraged during the Covid period, saying, ‘they should always stand up for what the institution was made for and nothing less, no matter what.

“If this is your passion to provide information, you have to be sincere about the information that you are giving out to the public, and keep up strong and fighting until you can get your hands on that impact that you have desired to make in the media landscape of our country”, Jackson maintained.