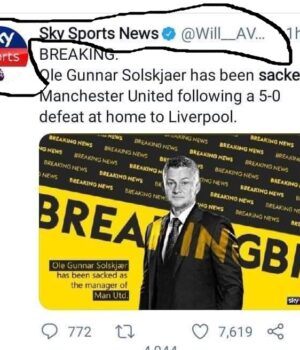 Claim: BREAKING: Ole Gunnar Solskjaer has been sacked by Manchester United following a 5-0 defeat at home to Liverpool.

Full Text: After the Red Devils’ woeful performance at Old Trafford, social media users circulated that the Man U coach has been sacked due to their (Red Devils) humiliation against Liverpool on Sunday.

Gazzetta link led us to a story on Nov 5, 2020,” Manchester United – Solskier: “I am to blame for these unforgivable mistakes” Gipedo link published on Nov 11, 2020, does not show that Ole is sacked.

Sky Sport is recorded as the source of the claim, but a search on the News outlet website does not have the story.

At the same time, though Ole told Goal that Transfers that the club is at ‘rock bottom’ he has insisted that he’s still the right man for the job.

After Sunday’s game, Goal published a story that fans of the club want Ole to be sacked, but the club is yet to take the action.

Conclusion: Though fans are requesting for the Red Devils coach to be sacked, it is safe to say that the post shared on social media is False, Ole Gunnar Solskjaer is not sacked.

No, US Democracy Meeting is Virtual and not In-Person Summit

False: CPP Has not Won Any County in Senatorial Election

The Happy Few’s Happy Places: How Liberian politicians and officials escape accounting for their...