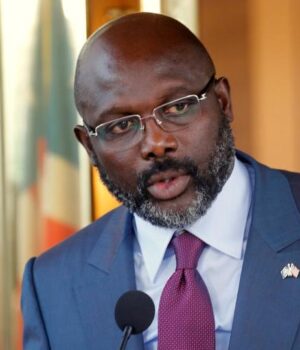 Monrovia- President George Weah on Thursday, in Maryland County told citizens, “The government has done more in three years than any other Administration in three years. We can continue to do more if you give us the chance to complete our work in progress.”

The claim is false.

Our verification established that Ex-President Ellen Johnson Sirleaf in 2008, which is three years of her first tenure, inherited public servants’ arrears of US$13.12 million of civil servants’ benefits which US$9.21 million was paid. In 2007 a total of US$5.24 million was paid.

In the three years, the long-overdue debts to the World Bank were cleared through an exceptional grant of US$421 million in early December of last year (2007).

The African Development Bank also cleared Liberia’s debts of US$250 million on December 18, 2007. In other words, more than US$670 million in debt was wiped off the books.  It was the first time in 20 years that Liberia was in good standing with World Bank and AFDB.

Additionally, in November 2007 the IMF Board agreed on a financing arrangement that ultimately allowed the IMF to fully forgive Liberia’s debts of US$920 million, the Heavily Indebted Poor Country (HIPC) Program.

The road from the Freeport to the St. Paul River Bridge was done. The Jallah Town road was done by Liberian engineers and workers but was later reconstructed.

Johnson -Sirleaf completed the reconstruction of 25.5 miles of community roads in the greater Monrovia area and 923 miles of farm to market. The fallen Vai Town Bridge construction also started in 2008.

Read our fact-check on President Weah claim on projects in his State of the Nation Address.

The majority of research was done between  December 2007-February 2008.

Essay: Pandemic City: The Paradox of Geography and Vaccine