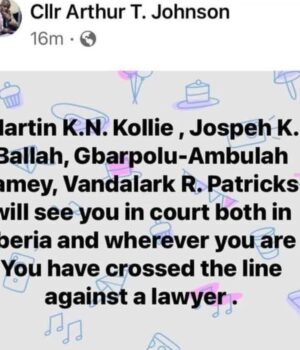 The claims “Martin K.N Kollie, Joseph K. Ballah, Gbarpolu-Ambulah Mamey, Vandarlark Patricks will see you in court, both in Liberia and wherever you are you have crossed the line against a lawyer.”

Vandalark R. Patricks- “Lol I need a genuine confirmation from any journalist in Liberia to establish if this is Arthur Johnson’s Official Facebook Page or if it hasn’t been hacked. When it is established that the counsel wrote this, then I know the time to weed out academic criminals in Liberia has arrived. I think it’s AIU fever that’s making someone to catch bad feelings. Complete arrogance. Well, may I also inform the counselor that he has from now to the end of April to denounce his FAKE PHD. By the way, which court? Tambah Court? Lol,  Again, AIU is a fraudulent institution and its recent disclaimer that it’s not accredited by any authorized agency in the United States should have beaten enough sense in the counselor’s head to denounce his fake PhD and request his money. We fought government and we won; da AIU graduate will scare us? See bad luck ayyy.”

The Stage Media reached out to Cllr. Johnson and he verified that the post was done by him. “I posted to laugh at them and because they want relevance at my expense. And I later posted that they will not get relevance from me for the purpose of seeking asylum”.

The Claim is Impossible to Verify

No, Dillon Didn’t Serve as Prosecutor