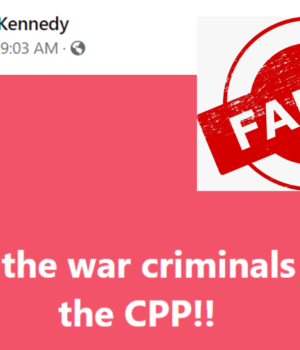 Full Text: A staff of Montserrado County Senator Charles R. Kennedy on his Facebook page on June 22, 2020, claim “98% of the war criminals are in the CPP!!  {Collaborating Political Parties}”

Verification: The Stage Media Contacted two human rights activists in Liberia,  Adama Kiatamba Dempster, Secretary-General of the Civil Society Human Rights Advocacy Platform said, “All those who were listed as a result of the Truth and Reconciliation Commission (TRC) findings were people who participated in the war and were active members of warring factions and that was not based on political alignments/affiliations. Whosoever making such claim, all we can say is that the claim has political undertone”.

Hassan Bility, Founder d Director of the Global Justice and Research Project Hassan Bility said “there is no available statistics to indicate what percentage of the TRC’s recommended names for war crimes prosecution are CPP members. I personally believe such a claim is not backed facts. (2) on the surface, only one of the four current CPP political leaders is named in the report, not for war crimes prosecution, but economic crimes. That’s {Benoni}Urey of the All Liberian Party, and (3) There are no war criminals named in the TRC. What you have there are names of individuals suspected of having committed these crimes. Under the presumption of innocence, every accused person is presumed innocent until proven guilty in a court of competent jurisdiction. So, there is a difference between political statements and facts.

False, Covid-19 Vaccine Not For Sale

Where is the Children Rights Law?