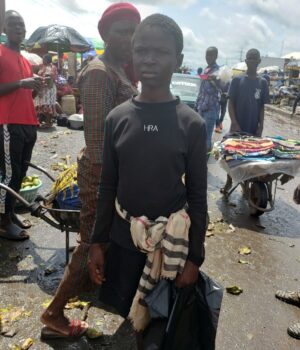 Eleven years-old Esther Kollie is confidently jostling between cars on a hectic Saturday evening finding her way from one end of the streets to the next. At this point, nothing occupies Esther’s mind more than meeting her sale target for the day.

She has to help her aunt, who she only identified as Yatta, to meet her weekly (daily saving) -Susu objective—this is a meagre L$1000.00 by the layman’s standard. This is an equivalent of US$6.00.

“Tomorrow is Sunday and my Aunty is supposed to pay the susu money. So she sent me to sell to help her get the money,” Esther told The Stage Media (TSM).

The Little merchant said she makes between L$1000.00 to L$1500.00 selling black plastic bags—a carrier buyers, especially those who go to purchase foodstuffs, use to handle their purchases.

The Saturday episode is a daily routine for the little girl who said she has never been to school since her aunty brought her from Bong County, though Yatta had given Esther’s parents, the impression that she was coming to Monrovia to attend school.

“I was not going to school in Bong County because my Ma and Pa were not having money.  So Aunty Yatta said she was bringing me to go to school but she can always say she does not get money so I should sell,” the kid says.

It has been two academic years since Esther’s arrival but her dream of acquiring education remains elusive.

Esther is one of the thousands of kids who have been brought from the interior parts of the country under the pretext of coming to the urban areas to acquire quality education. Many of these kids end up being breadwinners for their guardians or adopted families.

They are often seen on major thoroughfares in Monrovia and its immediate environs jostling between cars in huge traffic selling as state security officers clothed with the authority to enforce the law most times ignore the presence of those minors.

The Liberian government in 2011 enacted legislation to protect kids like Esther against being trafficked, child labour forced labour and other negative vices that might impede their growth and development.

Known as the Children’s Rights Law (CRL), the law mandates Gender, Labor and Justice Ministries to ensure the safety of Liberian children.

Speaking on the significance of the law when she signed it into law, former president, Ellen Johnson Sirleaf, said it would ensure the survival, development, participation, and protection of every child. This is yet to be the case.

Much is still desire exactly ten years after the enactment of the CRL, a legal instrument intended to ensure the protection and promotion of the rights of children—a segment of the Liberian population that.

Many believe no process has been made in that regard after a decade after what advocates praise as a milestone instrument came into being.

“There is not only an increase in child labour in different sectors of the society and kids being used as breadwinners for many families, the issue of internal trafficking is also in play here too,” a child rights advocate told TMS.

Session 2.3 B of the Decent work Act says, “without limiting the scope of the preceding provision, the following forms of work by children are absolutely prohibited: i) all forms of slavery or practices similar to slavery, such as the sale and trafficking of children, debt bondage and serfdom, and forced or compulsory labour, including forced or compulsory recruitment of children for use in armed conflict.”

Defence for Children Liberia (DCI-Liberia) Executive Director, Foday M. Kawah, puts it more squarely, “the case involving little Esther is an act of internal trafficking under the element of deception and fraudulent act.”

Kawah says the abuse against children is on the increase due to the lack of coordination among ministries that are responsible for children’s well-being.

“The ministries are not protecting the children because they lack coordination. And this deficiency is exposing more children to danger,” he noted.

For Champ Cole, age 13, and a 4th grader who also sells plastic in the commercial district of Waterside, he stopped going to school during the COVID-19 outbreak. This, he said, is due to financial reasons.

Cole is a resident of Fante Town and wants to be a medical doctor. But he wakes up every morning to see himself selling plastic to provide food for his mother and two siblings ages 17 and 10.

He told The Stage Media that his family was neglected by his father and after the COVID-19 outbreak his mother could not afford to have him and his siblings in school.

“I am selling this plastic for my aunt because my mother does not have money to send me to school. I make L$1000 every day and we used L$500 for food put L$500 susu that he will be able to go the school the next academic year,” Cole said.

Kawah said using kids as a breadwinner is wrong and doing so during school hours is the worst one could do to a kid because education is a right.”

“Having children between the ages of six to fifteen selling in the streets is risky. They should rather be in school. I think this was the rationale behind the government’s free and compulsory education program,” he said.

Liberia is a signatory to the Convention on the Right of the Child (CRC)—a legally binding international instrument for the guarantee and the protection of child’s rights.

Adopted in 1989, the Convention’s objective is to protect the rights of all children in which include education and stop child labour.

The Director of the Child Justice Session at the Justice Ministry, Atty. Alben Greaves disclosed that the country is heavily challenged in addressing the issue involving children at risk and children both in conflict and contact with the law.

It is Justice Ministry’s role to enforce the CRL but the government has nowhere to take the kids when they are taken off the streets. “This is the biggest challenge we are facing in that direction. The government lacks safe and transit homes, rehabilitation centers, hospitals, and feedings.”

The government back in 2013 tried taking the kids off the streets but was faced with logistical constraints and a lack of facilities to care for the children.

“This is still a serious challenge that has stopped the government from being proactive in the process today,” Greaves told TSM.

There is not much support from the government to maintain staff and keep programs involving the wellbeing of children.  “Even though UNCHF and other partners are trying that is not enough,” he said.

“Most of our programs are tie to donors so it is difficult to continue implementation if those funds stop coming,” Atty. Greaves disclosed.

The Ministry of Gender, Children, and Social Protection did not respond to queries for comment on the matter.

This reporter emailed the ministry’s communication specialist, Webster Cassell, but did not get a response. That was followed by text messages, phone calls, and two visits to the ministry’s Congo Town headquarters, which also did not materialize on grounds that the minister has not mandated the communication office to respond to the email.

True: Taking Pain Reliever After or Before Covid-19 Shot is Risky