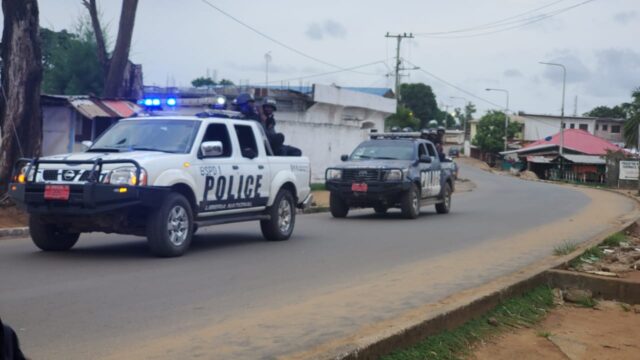 Liberia’s 2020 Crime & Safety Report, crime remained at a critical level throughout the country in 2019, owing to growing public discontent with Liberia’s uncertain economy.

The report furthered that home and residential compound invasions increased, as did violent robberies in populated areas.

There is an increase in reporting of non-violent crimes. Many of these crimes are “snatch-and-grabs” of electronics, purses, bags, and backpacks; vehicular vandalism; and vehicle break-ins categorized as theft.

These crimes of opportunity usually occur in densely populated areas throughout the country including Paynesville, a city near Monrovia in Montserrado County.

Most snatch and grabs involve young male assailants between the ages of 13 and 25.

These young people many of them drugged normally carry knives, cutlasses or homemade handguns and occasionally work in small groups to target unsuspecting victims.

However, the city of Paynesville which is one of the most populated cities in Montserrado is said to be home to several criminals, gangs and so-called vigilante groups burglarizing homes, business centers, and attacking people especially during the night hours.

Paynesville is a suburb east of Monrovia, Liberia. It is geographically larger than the city of Monrovia.

What do the people of Paynesville think about the daily increase in the reported criminal activities in the growing city?

The Stage Media has been speaking to scores of Paynesville residents.

King Letona, 55, Deputy Chairman in the Swankamore community in Paynesville.

“The people of this community are living in fear due to the continuous increase in criminal activities.

Letona said over the past time, some of these criminals were arrested and taken into police custody but are back in the community and are seen walking around freely in the environment; something he said a cause for concern.

“You see today, people are living in serious fear because of the plenty stealing around in the community, the police will sometimes come and arrest them today but the next day you see that same person walking freely as if nothing happened to them, and such thing should be happening like that.”.

Citizens of Paynesville like Letona expressed disappointment in the Liberian National Police for the poor handling of criminal cases, citing it is done based on bribery, a claim that the police spokesperson denied.

The human rights issues and corrupt practices highlighted in the report include arbitrary killings by police which include cases of cruel, inhumane, or degrading treatment or punishment, harsh and life-threatening prison conditions, arbitrary detention by government officials, serious problems with the independence of the judiciary and serious restrictions on freedom of the press, and among others.

“Sometimes you take your case to the police station the police will say go and come back after some time, to your utmost surprised you see that same person again in the street without any action taken against him/ her.

“Whoever carries the highest money wins the case, it is a drill we see every time.”

Ben Boyoe, chairman of Block- D Community, Police Academy said many residents relocated due to the increase in criminal activities.

“Despite police little intervention, there is still nighttime burglarizing of homes at various points.

“The police tried at times to patrol but they are not consistent, and the criminal takes advantage of the police absence.”

“When the police are on patrol, the criminal sought refuge from one place to another.”

“In years to come, with the current crime rate, the City of Paynesville will be a hide-out for criminals and could be a dangerous place to live.”

The Police must improve its strategy in tackling criminal activities, “The LNP must step up their games and steadily investigate and prosecute criminals who are arrested.”

Ben Blackie another resident called on the LNP to continue its nighttime patrol specifically in the Paynesville Red-light belt area.

“The LNP needs to step up especially in the nighttime, when you walking around the Red-Light area you see a group of young men pretending to be busy buying or selling something if you are not attentive enough they are going to harm you and take away everything you have.”

Moses Carter, LNP spokesperson in an interview via mobile told TSM that the LNP is aware of all the criminal complaints being forwarded at the various station in Paynesville.

He said night patrols have been done consistently specifically to places where there has been a short supply of electricity or no electricity at all.

He named the Zayzay Community, Upland Community in Duport road among others as places where outage of power supply always occurs.

Carter said the Police cannot do it alone, requesting community dwellers to rally in support of tackling criminals in respective communities.

“I want to call on all community dwellers across the city of Paynesville to help the police in the process so our various homes can be safe,

“Communities should organize vigilante groups to scare away criminals from during night and day, because you know the police alone can’t do all.”

He claims that some parents can shield criminals because of family relationships, “I want to discourage “some parents” who are in the constant habits of hiding criminals in their homes to desist.

According to him the more the community shield criminals it becomes harmful for everyone, especially at night hours.

Meanwhile, on May 20, 2021, the Anti-Robbery Unit of the LNP gunned down five robbers at the Fresh Frozen Food Liberia cold storage in the Redlight Market.

It can be recalled; Inspector General of Police Col. Patrick Sudue blames the growing wave of armed robbery and other crimes on the constant habit of the courts to release suspects from prison.

Col. Sudue’s claim prompted the Chief Justice of the Supreme Court, Francis Korkpor to reportedly request him to be specific to a particular case.

A statement that prompted Liberia Council of Churches president Bishop Kortu Brown to state a lack of coordination between the two law-enforcement bodies.

Bishop Brown said the lack of coordination of hierarchies of the justice sector in Liberia has the proclivity to undermine peace and stability in Liberia.