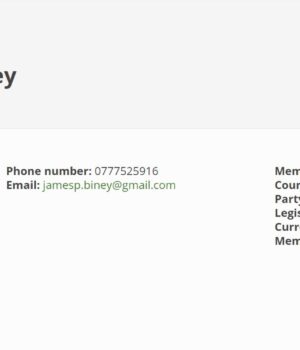 Claim: I  come desiring this position, having served in the house of representative as chairman of the foreign relations committee; this year  is my 16 years of Legislative practice”

Full Text: When Maryland Senator contested the Foreign Relations Committee position on Tuesday, May 19, 2021, he told his colleagues that he has stayed in legislative service for 16 years and has chair the committee of Foreign Affairs.

Verification: The claim by Senator Biney of the National Patriotic Party (NPP) is False, he was elected twice to the post of Representative in Maryland and for two years he served in the National Transitional Government.

Representatives are elected to six year-terms by the voters of their districts and Senator Biney- two terms and the additional two years amount to 14 years instead of 16 years.

Conclusion: Though the Maryland senator has served for two terms (6+6=12) as a Representative, and two years in the National Transitional Government of Liberia that amount to 14 years.

He was in December 2020 elected as a senator, his claim that 2021 amounts to his legislative practice to 16 years, is false.