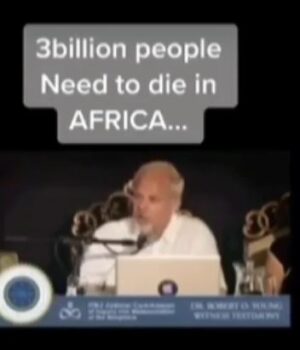 A 2019 video has resurfaced in Africa (Liberia) with claims by a discredited US naturopath that billionaire Bill Gates said the world should be depopulated of billions of people, starting in Africa. However, there is no public record of Gates making these remarks.

Since the start of the Covid-19 pandemic, the Microsoft founder Bill Gates who has poured hundreds of millions of dollars into the fight against the novel coronavirus — has been the target of many false or misleading allegations, including about forced population control. His foundation has repeatedly refuted these claims, which have also been debunked by TSM Fact Check.

The video featuring US naturopath Robert O. Young — who was jailed for illegally practising medicine — has circulated tens of thousands of times across multiple social media platforms in South Africa on January 11, 2021. This tweet was shared and liked hundreds of times. 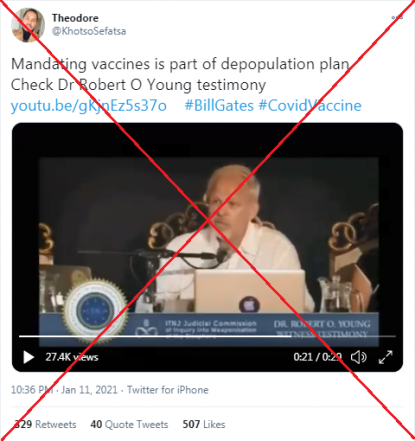 “For the purpose of sterilization and population control, there are too many people on the planet we need to get rid of. In the words of Bill Gates, at least three billion people need to die,”  Young says in the clip.

“These are Bill Gates words. Just Google Bill Gates and depopulation (sic) and sterilization. You’ll hear out of his own mouth the plan.”

Young was speaking as part of a panel organized by the International Tribunal for Natural Justice (ITNJ) — a group that holds unsanctioned “hearings” on subjects ranging from child trafficking to the alleged effects of 5G.

On its website, the ITNJ details its vision as “a world in which the Earth is honoured; Truth is spoken; Love is the basis of all action; and Justice is an organic, self-fulfilling function of respect for natural law.”

The organization says its aim is to  apprehend “the abuses and tyranny of systems and institutions; restore truth and reason to the delivery of justice in the world.”

No trace of the depopulation plan

The full version of the 98-minute video was published on the ITNJ’s YouTube channel on November 20, 2019.

Various other clips from the panel discussion were shared thousands of times in multiple Facebook posts, including here and here.

In the first 90 minutes of the video, Young makes unsubstantiated claims that viruses are not real, vaccines are poison, and that alkaline can be used to cure any ailment.

A basic Google keyword search did not reveal any trace of Gates ever making any public comments about plans to reduce the world population by killing Africans.

It is not the first time that these unfounded claims swirl around social media.

The organization’s healthcare efforts in developing countries over the past two decades have turned him into a bogeyman for conspiracy theorists, as AFP Fact Check reported here.

We also debunked a video of Italian politician Sara Cunial making this and other false claims about Gates in an address to parliament in May 2020.

The claim appears to find its roots in the misinterpretation of a speech Gates gave on carbon emissions over a decade ago.

During a TED Talk in February 2010, he discussed reducing global population growth through new vaccines and improved healthcare in order to lower carbon emissions.

“The world today has 6.8 billion people, that’s headed up to about 9 billion. Now if we do a really great job on new vaccines, health care, reproductive health services, we lower that by perhaps 10 or 15 percent,” he said.

Gates was talking about cutting global population growth by “10 or 15 percent” to reduce carbon emissions, rather than reducing the actual population.

In 2009, Gates recommended using vaccines to reduce child mortality rates. He argued that increasing the chance of a child surviving to adulthood and encouraging parents to have smaller families would create “a virtuous cycle” that lifted countries “out of poverty.”

Gates said that some parents choose to have many children as a way to offset high child mortality.

Below is a brief YouTube video from 2012 where Gates explains how population growth in underdeveloped countries can be mitigated.

The Gates Foundation has repeatedly rejected the depopulation claim.

“We are concerned about the conspiracy theories being spread online and the damage they could cause to public health,” its spokesperson told AFP Fact Check-in October 2020.

“At a time like this, when the world is facing an unprecedented health and economic crisis, it’s distressing that there are people creating and sharing misinformation when we should all be looking for ways to collaborate and save lives.”

To date, the Gates Foundation has pledged $1.75 billion to fight the pandemic.

Young is the author of a bestselling book series called “The pH Miracle,” which peddles an alkaline diet as a cure for cancer.

In 2017, the American was jailed for practising medicine without a license.

As part of his plea deal, Young had to admit publicly that he is not a “microbiologist, hematologist, medical or naturopathic doctor or trained scientist,” according to the San Diego Union-Tribune.

In 2018, he was ordered to pay $105 million to a cancer patient who testified that Young presented himself as a doctor and advised her to forgo traditional medical treatment.

In the video, Young alleges to have proof that those who testified against him when he was jailed were bribed to do so.

Beware, the Website Promising Scholarships at the University of Oslo is a Scam!

No, MTN is not giving Valentine’ Gifts