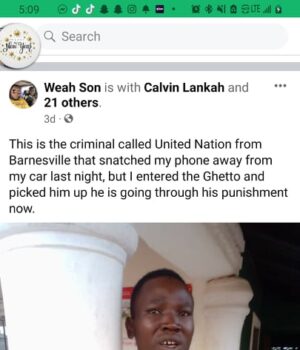 When Jimmy Defoe alias Weah Son posted on the social media page his missing phone and subsequently arrested the culprit, what was surprising was the handcuffed placed on the suspect at his home.

He wrote, “This is the criminal called United Nation from Barnesville that snatched my phone away from my car last night, but I entered the Ghetto and picked him up he is going through his punishment now.”

The suspect without shirt and green undies was seen handcuffed to one of the pillars in the Defoe’s home.

Many of those comments condemned the action while others were in support of Gaiyue’s action.- Robert Johnson, “Defoe just give him quinine injection and let him go.”

Derryl Romell D Yekeh said, “That was wrong. You had no right to treat him the way you did. As train security, you had the right to turn him over to the police but not to brutalize him. As we all know, Liberia has laws and you are not above the law either.

These are some reasons why our country is not moving forward cause we got lawless and shameless goat like you in our society who’s damaging the image of our country. You just acted like a terror man.”

Another comment reads, Chrision Miles “Totally nonsense you have no right taking him to your resident, and brutalizing him like that, and I’m sure there’s law enforcement headquarters in the city that you can turn him over at.

What are you trying to prove because of a phone, and you should be ashamed of yourself, and if you were well trained you won’t take the law into your own hands just because someone stole from you. This’s why our country is a curse because people like you ain’t good in society.”

Others questioned him if he was the court to penalize people for crimes,

“Why are you guys misusing and abusing power?- “Is this the Liberia we all want a Liberia that people will take the laws in their hands; You guys speak against mob justice.

You guys make the laws and enforce the law but see how you are shamelessly posting such simply because you guys have power.”

Gaiyue who is allegedly linked to Anti-Terrorist Unit, a Taylor’s feared praetorian guard, has been implicated in political killings.

There has been numerous of harassment both urban and rural communities and violence against residents by a law enforcement officer.

“He was brave beyond himself to brutalize and torture a guy the, the fact is that under our jurisprudence, there is no such individual that has the right to inflict pains on someone, every qualm must be dealt with under the law.”

The Human Rights Watch has described multiple violent encounters with the Law enforcers wherein one individual was tied up, beaten and robbed when an incident occurred.

The State Department 2019 Human Rights report significant human rights issues included: arbitrary killings by police; arbitrary detention by government officials; harsh and life-threatening prison conditions; serious problems with the independence of the judiciary; substantial restrictions on free expression and the press, including site blocking; official corruption; lack of accountability in cases of violence against women due to government inaction in some instances, including rape and domestic violence among others.

The report states impunity for individuals who committed human rights abuses, including atrocities during the civil wars that ended in 2003, remained a serious problem.

The government made intermittent but limited attempts to investigate and prosecute officials accused of current abuses, whether in the security forces or elsewhere in the government.

Meanwhile, Jippy disclosed that Defoe is dismissed with immediate effect for publicly undressing and beating an alleged criminal who he suspected of stealing his phone in the Township of Scheifflin along the Monrovia Robertsfield highway.

Addressing a News conference Tuesday, Mr. Jipply disclosed that Defoe will be handed over to the Ministry of Justice for prosecution for undressing and brutalizing a suspected criminal

Is Varkan Ege the first International Vessel at Harper Port in 31 years?

False: Covid-19 Vaccination is not (and will not be) Mandatory in Liberia

Coffin resembling phallus was used to bury Ghanaian man who performed circumcisions, not a...