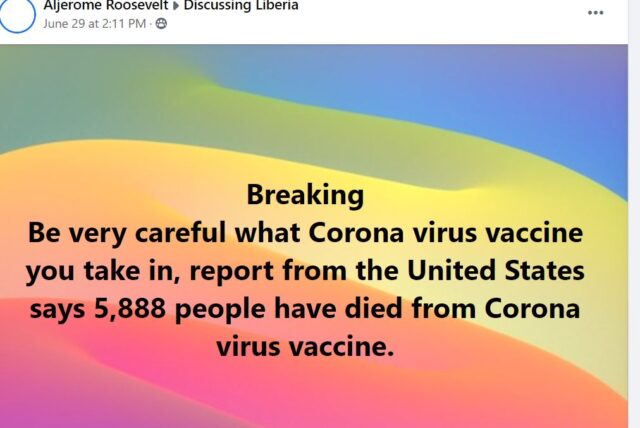 Full Text: A Facebook account Aljerome Roosevelt claimed that the Covid-19 vaccines have killed 5888 people in the United States.  This is roughly the number of deaths reported in the US following the Covid-19 vaccination between December 2020 and April 2021, but there’s no evidence that these deaths were caused by the vaccine. The post was shared in six Facebook groups and attracted 21 comments and reactions.

The post doesn’t provide a source for the figure, but it is likely to have originated from remarks made by Fox News Host Tucker Carlson on 5 May 2021.

Carlson quoted the same number, claiming that it was taken from the federal Vaccine Adverse Event Reporting System (VAERS).  But American fact-checking organization PolitiFact did a similar claim but with a different source: “Between late December of 2020 and last month, a total of 3,362 people apparently died after getting the Covid vaccine in the United States”.

There’s also no evidence that mass amounts of people getting the vaccine could contribute to cutting down the population or kill people.

Verification: In fact, there is data on this topic, and it proves that there’s a minuscule portion of the vaccinated population who have had adverse reactions to the drug. Reuters recently fact-checked this issue and found that out of over 130 million people who have received COVID-19 vaccines so far, only 0.0017% have died.

It is also unclear what led to those deaths, but health officials say there’s no evidence they died because of the vaccine.

There’s also no evidence that mass amounts of people getting the vaccine could contribute to cutting down the population, or kill people.

Reuters interviewed Dr. Dana Mazo, an infectious disease specialist at Mount Sinai Hospital in New York. Some people who died after receiving the vaccine most likely perished from unrelated causes. But Mazo argued that the risk of dying from the virus without being vaccinated at all is much higher.

“The idea is that we are vaccinating millions of people,” Mazo told Reuters, “and, unfortunately, when you look at 96 million people, some of them might die, and they would have died if they hadn’t been vaccinated.”

The CDC reviewed “available clinical information including death certificates, autopsy, and medical records” of that small percentage of people who died after the vaccine and found “no evidence that vaccination contributed to patient deaths.” There’s also no evidence that COVID-19 vaccines cause autoimmune disorders.

On its website, the CDC says “COVID-19 vaccines are safe and effective. To date, VAERS has not detected patterns in the cause of death that would indicate a safety problem with COVID-19 vaccines.”

Verdict: False, the claim that thousands of U.S. vaccine recipients died after getting the vaccine.