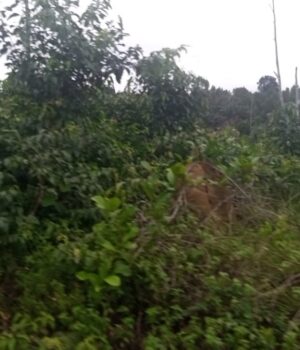 Disclaimer: We did not Title this, but this File was sent to our fact-checking desk to verify the claim

Claim: I have a farm in Sinoe, I harvest every year and in Gbi and Duro I was given 500 acres of Land

Full Test: Liberia’s President George Manneh Weah in an interview claim that he currently has a farm in Sinoe County.

The claim by the president was when he appeared on the Liberia Media for Development Initiatives.

He said, “I just want to tell my people that they should go back to the soil and I have been making farm and I have a farm in Sinoe; you know Gbi give me 500 acres and I harvest every year and my people there I tell them to feed themselves.”

A post was done by Gbarpoluboy-Ambulah Mamey, implying that the President “lied” about having a farm in Sinoe.

But Deputy Information Minister Boakai Fofana responded to the post, “A few hours ago I was tagged in a post by Gbarpoluboy-Ambulah Mamey, implying that the President “lied” about having a farm in Sinoe.

“Ambulai didn’t do his homework before posting on here, otherwise, he would have known the President DOES own hundreds of acres of farmland in Kpayan District, Tartweh Chiefdom. That’s one of the places the President will be making a stop tomorrow (it’s unlike me to post his itinerary, but it’s necessary in this case). So Ambulai, it seems YOU ARE THE LIAR MAN HERE “

Agriculture is the backbone of any economy, but this is particularly true in Liberia. Over 80 percent of Liberians live in poverty, earning less than $2 per day. They rely heavily and primarily on small-scale subsistence farming for their income, nutrition, food, and survival.

The stage Media verified the claim in two forms, both in Nimba and Sinoe:

Does President Weah have a farm in Sinoe and Nimba, if yes, has there been a harvest as he stated?

In verifying the claim one; TSM reached out to Superintendent Lee Nagbe Chea who declined in responding.

Two Journalists from Sinoe Josiah Fannieh and Salacious Gbaawulu confirm that there is no farm in Sinoe but rather said there is farmland that was given to President Weah by the county officials.

“There is no farming activities carried out by him, President Weah paid a visit to the site during the county tour but there is no crop on the land and I can say it is a farmland instead of a farm,” said Gbaawulu.

On the second claim, In Nimba, President Weah toured his farm according to state broadcast ELBC on February 19, 2021.

In the video, President Weah was presented the document of the farmland by elders of the town in District no.9, Nimba County.

Nimba County District no. 9 representative Johnson Gwaikolo confirmed that 1500 acres of land were gifted to President Weah and rice is now planted there.

We also reached out to the Superintendent of Nimba Nelson Korquoi who also confirmed farmland but said there is currently a plan to harvest rice at the end of the year.

Superintendent Korquoi said the harvest will be the first since President Weah received the land.

President Weah on his farm in Nimba County /LNTV

Conclusion: The claim made by President Weah that he has a farm in Sinoe is Misleading, at the time the video was produced, he only had farmland as it is today.

In Gbi and Doru, Nimba County, there is an ongoing farming activity that also shows that when the interview was done, there were no farming activities as stated by Weah.

Fact Check: Liberian Named Youngest Pilot of Delta Airline was in 2017 and not...

Quick Check: There is no threat from Russia to bomb Liberia