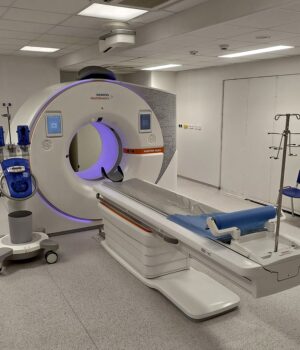 Claim: It is this administration that was able to place a CT Scan
at JFK.

Verdict: False, there was CT Scans at the hospital prior to this administration ascendency.

Full
text: on Tuesday, May 17, 2022, edition
of the OK
Conversation, at
2:10:25 second; Montserrado County Senator Saah Joseph said that the George
Weah administration is the first to place a CT-scan at the country’s major
referral hospital JFK.

During a phone
conversation on the show, a caller decried the deplorable state of JFK.

In response,
Senator Joseph said, “Let me tell you, Julius, under this administration, the
status of JFK is far better than JFK ten years ago. It is this administration
that was able to place a CT Scan at JFK. You do not know the importance of a CT
Scan but it is very important in the health sector.”

Who is
Saah H. Joseph?

Montserrado
County senator Saah H. Joseph, is a stalwart of the ruling Coalition for
Democratic Change (CDC) who replaced President George M. Weah in the 54
legislature in 2018 after winning the 2017 general and presidential elections.

According to the Executive Mansion website on September 13, 2013, former President Ellen Johnson Sirleaf said, “We were pleased to launch an initiative with the Institute and look forward to the installation of the country’s second Computed
Tomography (CT) Scan Unit donated by India, to be installed in an Imaging Center to be supported by another Indian company, the Jindal Group.”

Also, on August 23, 2016, Sirleaf briefed the cabinet on the installation of CT Scan to be installed at JFK.

Conclusion: The statement by Montserrado Senator (2:10:25); Saah Joseph is False; since the Executive Mission website indicates that there were CT scans at JFK.

No, National Agricultural Fair Was Not Held 13 Years Ago

False, the photo on social media is not Samia Suluhu Hassan, with her daughter