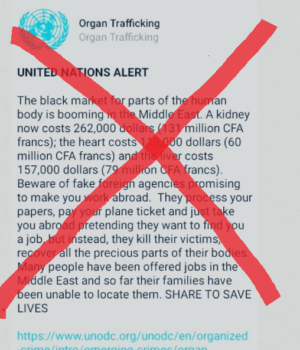 Claim: UN issued an alert on the black market for human body organs in the Middle East.

Full Text: A social media message circulated on messenger and WhatsApp showing an alert reportedly from the United Nations, giving a warning on a black market for human body organs in the Middle East. It lists the most valuable organs. According to this alert, a kidney is said to cost $262,000, a heart, $119,000, and a liver $157,000. (See screengrab below).

The supposed alert, which features the UN’s logo, reads:

“The black market for parts of the human body is booming in the Middle East. A kidney now costs 262,000 dollars (131 million CFA francs); the heart costs 119,000 dollars(60 million CFA francs) and the liver costs 157,000 dollars (79 million CFA francs). Beware of fake foreign agencies promising to make you work abroad. They process your papers, pay your plane ticket and just take you abroad pretending they want to find you a job, but instead, they kill their victims, recover all the precious parts of their bodies. Many people have been offered jobs in the Middle East and so far their families have been unable to locate them. SHARE TO SAVE LIVES

However, the claim is false. The purported alert is fabricated, and the UN denied it issued any such alert.

Verification: First, we checked a link shared by this alert, and the results show that it is faulty. However, it mimics an archived link from the United Nations Office on Drugs and Crime.

The difference between the two is the former gives an alert of a black market for organ trafficking in the Middle East, giving prices of these organs. While the latter from, UNODC, acknowledges that there could be a desperate situation where human traffickers exploit organ donors solely for selfish gains. (See screengrab below).

An internet search by The Stage Media likewise found no media reports of the U.N. issuing the statement in question.

This alert has previously been flagged by a number of credible fact-check organizations. One was published by Pesa Check on March 18, 2021. Additionally, in an email to the Ghana Fact, UNODC’s Chief of Advocacy disputed claims that this document originated from the United Nations Office on Drugs and Crime.

Verdict: NO, the United Nations has not given a warning about a black market for human organs in the Middle East.