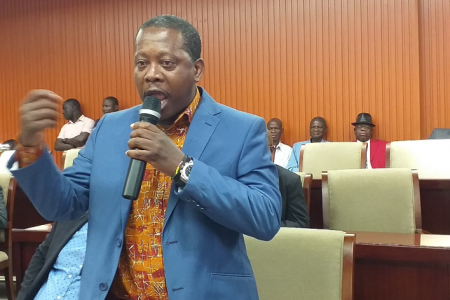 Montserrado County District #8 Representative Acarous Moses Gray made claims on the Ok Conversation, a radio station located in Central Monrovia, when he was interviewed by the show host Julius Jeh on June 1, 2021.

Verification: The Stage Media contacted the All Liberian Party (ALP) where Mr. Benoni Urey serves as a Political leader. The  ALP National Policy Advisor on Media, Propaganda and Information Services Clifton B. Hilton in a telephone interview with TSM described the claim by Mr. Gray as fabrications and made-up stories.

TSM also contacted  Senator Prince Johnson who said the claim made by Rep. Gray is true. “That is true, the claim made by Gray. That is not necessary now. I am focusing on my development in Nimba. I spoke on BCC and VOA and all about Alain Whyte when he talking about war crimes court for me everywhere. You know that I am a criminal then you called me to Ghana to be VP to Urey? Gray said the truth.

Verification: The Stage Media forwarded the claim made by Representative Gray to Unity Party Deputy Secretary for Press and Publicity Cornelia Kruah-Togba for verification.

Cornelia Kruah-Togba said as she suspects, the claim is false (As I suspected, this is false).

Mr. Benoni Urey’s ALP says the claim is also false and it is a made-up story by Representative Acarous Gray. ALP National Policy Advisor on Media, Propaganda and Information Services Clifton B. Hilton told a TSM interview that at no time former Vice President Boakai and Urey had ever sent emissaries to Senator Johnson to ask for his support in the mix of the citizens call for the establishment of a war crimes court.

Claim #3: I support the Weah & Jewel ticket. I know they will be in Lofa County together. The President and the Vice President have never had a disagreement. The vice president has said that consistently that she doesn’t have any disagreement with the President. I know she has her own disagreement on some issues.

Verification: There is nothing to point to that there is a disagreement between President George Weah and his vice Jewel Howard-Taylor. But there has been news of marginalization towards the VP from the government. VP Taylor has on several occasions complained of a lack of necessary basic logistics for her office to function. Due to the reported lack of support the Vice President has been unable to attend some state functions.