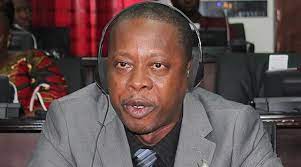 VP Boakai’s Statement: “Foreign Policy? I think when you talk about foreign policy concerning Liberia, by the time you say Liberia they say the United States.  Can any of our top officials go to the US to negotiate for us?”

VP Boakai was in a conversation with Show Host T-Max who asked: “There are two top guys there negotiating now as we speak.”

VP Boakai: “Negotiating with whom? American drivers? Well, there is a saying that when you brush with the bamboo stick you eat the food under your chaise. Who are they negotiating with when they come we will see! When we travelled those days we came back with results. We brought good news, we brought resources, we brought investment. Let the negotiation bring those resources to let us see them.”

TSM Verification:  The Stage Media listened to the entire interview that lasted for over two hours and the former Vice President and Unity Party Standard-bearer made no mention of what Representative Gray posted.