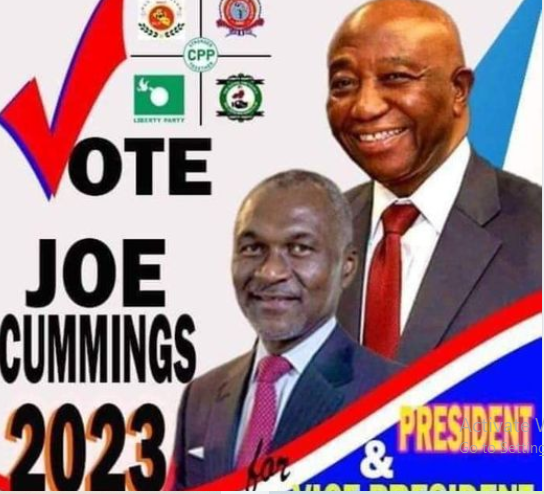 There has been an increasing barrage of arguments and speculations on social media since the beginning of 2021 in the camp of the major opposition bloc in Liberia Collaborating Political Parties (CPP) over who will head the CPP ticket in 2023.

The CPP is made of four political parties, Alternative National Congress (ANC) headed by Alexander Cummings, Alternative National Congress (ANC) – Benoni Urey, Liberty Party (LP) – Nyonblee Karngar Lawrence, and former governing Unity Party of widely believed in the opposition that by all cost either Boakai or Cummings should head the opposition ticket for the upcoming 2023 elections.

The claims are not only among the political institutions but media institutions have also started speculating using sources.

One of the said institutions is online Cable TV.

“According to inside sources in the corridor of the CPP, the ANC Political leader said, he will now let go his Presidential Ambition for the sake of the country” I’m going second to the Oldman, let forget about Voter perception survey, let forget about convention ” Mr. Cummings privily (should be privately) stated to our source”. Online TV continues.

The claim made by ‘Cable TV’ on social media continues to generate comments, likes and love with many people in the Collaborating Political Parties expressing contrary views on what was reported by the online news site. It has generated 70 likes and love, 137 comments and 62 shares so far.

Stephen Mackintosh: “Thank To Mr Cummings As His Thinking To Win Single Handled Is Not Posible Here Now, And He Has Prove Himself Wrong. Mr Cummings No Matter What Happen We With Conduct Promiry For Ur Position. Get Ready To Spend Fresh Bank Note

Emmanuel Wreh: The God we serve is a God of reality. The accident you have posted will not come to past in 2023, Liberians are not fools.

Philip M Mark: My fellow viewers and writers wait and see the outcome of the CPP’S primaries before expressing views. One thing that I’m cognizant of is the power of social media, anyone, at anytime makes a perception without checking the facts surrounding the issues. However, one thing I am confident of is the CPP is a political force for good, a conglomeration of ideologues who without any doubt can ably deliver mama Liberia from this current state of economic backwardness.

Joe Faryean: Complete BS former VP Joseph Boakai need to be retired it is time for next generation of Leaders…..

On Sunday, the ANC leader wrote on his official Facebook page claiming that he has held successful visits to Nimba, Bong and parts of Montserrado continue to meet and engage the people as he solicits their support for the leadership of the CPP and the country come 2023.

Cummings continued: “Tomorrow I continue my county visits to Grand Bassa County after successful visits to Nimba, Bong and parts of Montserrado counties. We will continue to meet and engage with our people as we solicit their support for the leadership of the CPP and the country come 2023.

We must take their ideas, suggestions and views into account as we draft policies and plans intended to benefit them. Our people want better schools for their children, good hospitals, a working economy and to be able to feed themselves amongst other requests.

With over four decades of competitive business and financial experience, I am confident that we can turn the Liberian economy around. I believe in Liberia. I also strongly believe in Liberians. We are strong and resilient people. I am excited about my visit to Bassa this week and I look forward to meeting our people in their communities, towns and villages. I’m also excited about my visits to other counties in the coming weeks”.

The Stage Media contacted for a response on claims that Mr. Cummings has accepted to serve as running mate to former Vice President Joseph Boakai, Unity Party official Spokesperson Cornelia Kruah-Togba said the information is not to her knowledge. Madame Kruah continued: It has not been formally communicated by any party executive. Perhaps this is speculative”.

TSM verification also considers that since the CPP has not held its convention, there is no head of the ticket.