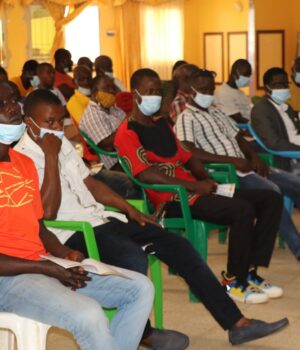 Unlike many of its neighbouring West African nations, Liberia is not known as a traditional mainstream producer of cocoa beans.

It produces about 10,000 metric tons of cocoa beans a year, just 0.2% of world production.

While this figure seems minuscule, up to 40,000 smallholder farmers in Liberia produce cocoa and rely on the crop for income and food security.

Despite the vital role cocoa plays, incentives and opportunities for producers to benefit from growing and selling cocoa beans are few.

A sizable gap in production skills and a lack of reliable market access hampers the development of the sector.

To assist farmers with skills in cocoa best management practices, the Cocoa Value Chain Development Programme (COVADEP) within the framework of the Cocoa Centers for Development (CCDs) will facilitate the setting up of Farmer Field Schools in targeted communities in Grand Gedeh and River Gee Counties as the core targets areas.

The Cocoa Value Chain Development Programme (COVADEP) is implemented by Solidaridad co-funded by the European Union.

The value addition component under COVADEP will be extended to Lofa, Bong and Nimba Counties.

According to Solidaridad, the approach would combine theory with field practice that allows farmers to observe the impact of specific agronomic practices on cocoa tree health and productivity.

Solidaridad told a gathering in Zwedru City, Grand Gedeh that the overall goal of the action is to reduce poverty through increased resilience/competitiveness of the Liberia cocoa sector and improve cocoa farmer livelihoods /food security.

Remarking at the event in the launch of COVADEP, Michael Doe Country Representative of Solidaridad Liberia said though according to statistics, cocoa is Liberia’s second most important export crop, however, production is somehow inefficient compare to other countries in West Africa.

“According to statistics, cocoa is Liberia’s second most important export crop; however, production is somehow inefficient compare to other countries in West Africa,” Doe said.

“Besides the 12%, some problem we also encountered is that the sector is been played with a lot of issues including poor access to lack of agriculture materials”.

Michael Doe mentioned that farmers in Liberia really don’t have access to improve varieties of materials to plant and that Liberia has to input from Ghana among other places to input seeds.

“We also understand that farmers in Liberia lack the skills intern of how to go about using best practice in planting cocoa seedlings,” Doe noted.

“One of the methods we are using is to train Farmer Field School facilitators in targeted communities in Grand Gedeh and River Gee Counties,” Michael said.

For her part, Geertrui Laouwagie, the Corporation Officer for agriculture development and food security of the European Union, co-implementer of the COVADEP program implemented by Solidaridad mentioned that though there were challenges during the commencement of the program its running has been made possible through collective efforts from the two organizations.

“The COVID-19 pandemic disrupted the programme activities by the time it was starting”.

She said together with development and implementing partners, the EU has been active in value chains of staple crops including rice, cassava, vegetables and cash crops like cocoa, coffee and seeks to fund activities that are innovative for Liberia.

“Together with the development and implementing partners, the EU has been active in value chains of staple crops (e.g rice, cassava, vegetable) and cash crops (e.g cocoa, coffee) and seeks to fund activities that are innovative for Liberia (e.g integrated rice-fish farming system)”. She mentioned.

According to her, cocoa has the potential to be one of several success stories for Liberia’s development.

Laouwagie said the EU would be keen to build on its ongoing investments in Liberia’s cocoa sector over the period of 2021-27, and people of a slightly different way of engaging with the government of Liberia.

“We, the EU would be keen to build on our ongoing investments in Liberia’s cocoa sector over the period of 2021-27 and propose a slightly different way of engaging with the government of Liberia”. She said.

“Nevertheless, with the help of officers of the Ministry of Agriculture and the local county authorities, Solidaridad staff managed to start engaging farming communities, who will be most numerous to benefit from the programme,” Geertrui said.

Delivering the Keynote address at the official launch of the program in Zwedru Grand Gedeh County, the County Superintendent Kai G. Farley informed Solidaridad that farmers in the county have access to cocoa seeds and have their farms but they do not have people who will help to provide a proper guide for protection of the crops.

Superintendent Farley mentioned that after the cocoa nurseries are grown the local farmers do not have access to professionals who will help them take care of the crops while others will have to hire people from neighbouring countries especially Ivory Coast to do so.

“We have the seeds, we have nursery been turned over to us as it will be in time to come, but after the nurseries are given to us we need people to help us to take care. Some of our farmers have busy schedules and some have to go as far from Liberia to hire experts to do so” Farley said.

On behalf of the people of Grand Gedeh County and in my own name to appreciate the European Union who has been the brain behind the program and Solidaridad who is creating the very big nurseries all over and I am very impressed because I am a farmer also”. He said.

Superintendent Farely said the government of Liberia will work close with Solidaridad and the European Union and farmers in the affected communities to ensure COVADEP becomes successful in the country.

“We pray and hope that we can be more than Ivory Coast (in cocoa production) because right now Ivory Coast is doing well in production,” he said.

Abigail Dweh one of the Solidaridad participants of the TOT told the gathering that due to the Trainer of Trainers training, they were thought several new measures of planting cocoa which is international best practice.

“On the TOT training they thought our new measures of planting cocoa. The distance between the cocoa trees is three meters from one to the other”. Ms. Dweh

She thanked Solidaridad and her co-founder the European Union for teaching them cocoa best management practices and want the two institutions to work to improve the cocoa sector.

No, The Image of a Man on a rack is not from Liberia

No, Ghana has not Introduced uniforms for Teachers, But,

Boy, 11, Starved to Death by Father and Stepmom