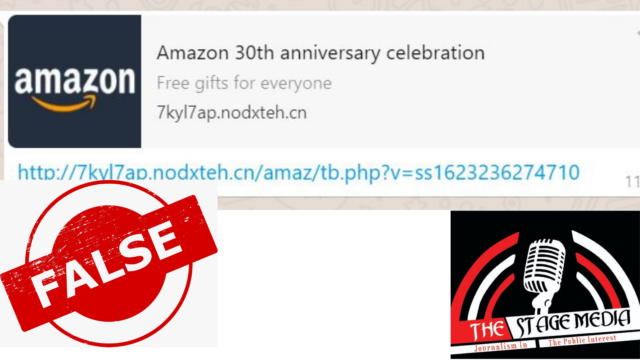 A Social media message sent by WhatsApp and Facebook with claims that  Amazon is celebrating its 30th anniversary and sharing gifts is False.

Many social media users continue to share the message, and this has attracted many internet user’s attention.

We have prepared some rewards for who participate in the survey.

You only have 4 minutes and 27 seconds, to answer this survey!

Hurry up, the number of prizes available is limited!

The Stage Media used online search engines and found no links that Amazon is giving out gifts.

The link is also broken.

Amazon is an American multinational technology company that focuses on e-commerce, cloud computing, digital streaming, and artificial intelligence. It is one of the Big Five companies in the U.S. information technology industry, along with Google, Apple, Microsoft, and Facebook.

The company has been referred to as “one of the most influential economic and cultural forces in the world”, as well as the world’s most valuable brand according to Google.

Conclusion: The message is False, be warned.