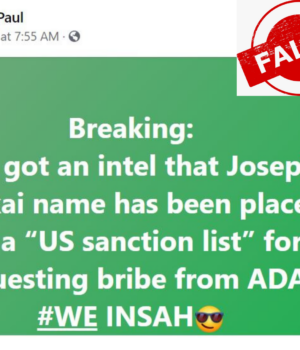 Claim: A social media post claims “Just got intel that Joseph Boakai has been placed on US sanction list for requesting a bribe from ADA.

The claim that former Vice President Joseph Boakai has been placed on the US sanction list is false. The U.S. DEPARTMENT OF THE TREASURY sanction list has no record of the claim.

A Facebook post from the account handler Prisca Paul published on April 26, 2021, claims that former Vice President Joseph Boakai is on the US sanction list because of a bribe he received from African Development Aid.

The ADA – Agricultural Company mandates Government of Liberia to produce rice to feed the country.

When TSM search the tool, former Vice President Boakai name was not among the 13 contacts listed in Liberia.

Though multiple controversies have been looming around the ADA project, former Vice President Joseph Boakai  has not been listed on US sanction list. Therefore, the claim, posted by Prica Paul is false.

No, Ghana has not Introduced uniforms for Teachers, But,

Fact Check: Does President Weah have a Farm in Sinoe and Nimba?