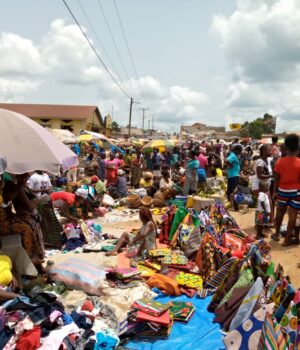 The Nimba Citizens many of them petty traders said the tough economic situation has slowed growth in every quarter of the society with many parents unable to make ends meet.

According to the World Bank, the COVID-19 pandemic and related containment measures adversely impacted economic activity during most of 2020. Following the lifting of lockdown measures in the second half of 2020, economic activity has picked up in most of the productive sectors of the economy.

Despite the World Bank report that economic activities have picked up in most of the productive sectors of the economy, in Liberia, the narrative is different.

Liberians, especially those in urban areas are said to be facing lots of difficulties economically with bad roads and a sharp rise in prices of goods and services serving as some of the major challenges.

In Nimba County specifically Karnplay City, citizens continue to speak to the challenges they are going through daily.

In an interview with The Stage Media that the economic status in the country has reached a height at which many have turned to beggars while others are dying from simple diseasing as a result of lack of drugs and other medical materials at nearing all government-run medical facilities.

James Lan, resident of Karnplay, 51 years, and a father of 14 children.

‘’Things have become very hard if you cannot go on the farm even with the level of your education, you will die with frustration as the result of embarrassment from the kids, now I am 51 years of age with 14 living children no support if I don’t farm I will not survive”.

Making comparative analysis on the past and current regime in terms of governance, Mr. Lan said ‘’During the past leadership, things were okay, jobs were available, and NGO’S were flying here and there but now, things are totally tough.”

Lan, a resident of Larpea number 1 town in Nimba however called on the central government to improve the livelihood of those at the margin of society through integration by incorporating citizens into the various sectors in the government despite political, social, tribal differences.

“I want the government to improve the living conditions of citizens through integration by incorporating citizens into the various sectors in the government despite political, social, tribal differences”. He told TSM.

He further called on the national and local leaders to coordinate the affairs of the people better. “In some areas, the government is not coordinating as the result people heading those sectors are performing their way. Education and Health sectors, there is no better, as teachers and Health workers cried because of retirement without benefit and no one is listening to them.

Mr. Alexander W Deemie, 35 years,  a father of three children; like many others also shifted the blame on the government for not doing enough for the people. As the result, the economic situation continues to grow because of low job opportunities. Even there is more qualified youth nowadays but they remain unemployed in the country because there is nothing for them to do”.

‘’I cannot say that there is an improved living condition for the past three years. During the regime of former president Ellen Johnson Sirleaf, there were lots of international partners, organizations, NGOs in the district operating with the community people in whom most community dwellers find something to do at the end”.

He recommends to the government to improve its lobbying capacity with international partners through constructive engagement as the only means of providing job opportunities that will help reduce the newest nightmare in the country.

Mr. Deemie also encouraged the national and local government to prioritize agriculture and technology to provide job opportunities for those at the edge of the community.

‘’Liberia is considered as one of the poorest countries in the world, partly because of the bad governance system which continued to negatively impact its population,’’ Gbehlay Geh Statutory Advocacy group Spokesman Marzar said.

Mr. Marzar has however called on President Weah to disassociate himself with people linked to past corruption, mismanagement or key figures in the Liberia civil war if he wants to fight the hard economic situation in the country.

Lorguatuo border is surrounded by the Cesto River located north and eastern part of Nimba County bordering with Ivory Coast.

President Weah in his 2021 annual message said Liberia understands that investors require greater levels of confidence in Liberia’s ability to deliver on their investments.

“We understand that this will require greater transparency and improving our ease of doing business. Today, we commit to making these changes and look to engage with investors, the international community, and other stakeholders to make the necessary improvements,”

A promised that Liberians are yet to vividly see.

No, Man U Coach is not Sacked

False, Banana Does Not Prevent Covid-19