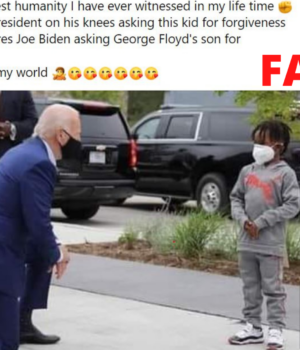 Social Media users circulated an image of  United States President Joe Biden kneeling before a boy claiming that the President was begging the child for forgiveness.

America president on his knees asking this kid for forgiveness

Read some of the comments:

Humble Boakai Penpusher Sheriff-“African leaders will instead ask him to sit on his mother’s lap and avoid the conversation.”
J Ernest Prolific Passawe II-“Let LNP sit on ur neck too, Jorweah will bow to your daughter.”
Benjamin Dunn Harris-“The fight against racism is not just about a public show, it’s a complex situation that requires practical measures. Humility exhibited, but actions to fight against racism are exactly what his administration needs to undertake.”
some comments questioned the post,
Michael Reloaded Roberts-“Is that George’s daughter?”
Ste Ven-“He was not president the time this photo was taken, and that’s not George Floyd’s son.”

It can be recalled Floyd, a 46-year-old Black man, died on May 25, 2020, after Chauvin, a White former Minneapolis Police officer, placed his knee on Floyd’s neck for an extended period while Floyd pleaded, “I can’t breathe.” His final moments were captured on video, and his death led to widespread protests against police brutality and racism under the banner Black Lives Matter as well as incidents of unrest and looting, the trial is currently ongoing.

Tineye verified the image as Getty’s and accordingly, it was taken during the 2020 campaign in Michigan.

“Joe Biden Campaigns In Warren, Michigan DETROIT, MICHIGAN – SEPTEMBER 09: Wearing a face mask to reduce the risk posed by the coronavirus, Democratic presidential nominee Joe Biden kneels to chat with C.J. Brown while shopping at Three Thirteen, an apparel store on the city’s Avenue of Fashion, September 09, 2020, in Detroit, Michigan. Biden is campaigning in Michigan, which President Donald Trump won in 2016 by less than 11,000 votes, the narrowest margin of victory in state’s presidential election history. (Photo by Chip Somodevilla/Getty Images)