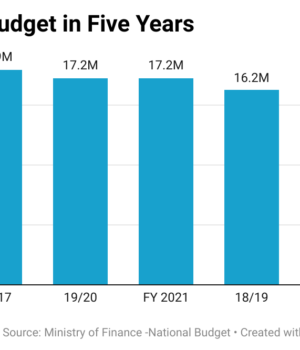 In recent times, there has been consistent calls of the
Liberia National Police to take control of the increase in lack of security in
the country.

But the LNP
says they have taken a vigorous stride to improve the country’s security sector
as the police is the first contact between citizen and the law.

As the country draws to election 2023, the wave of
insecurity remains a major challenge.

The police 2022 budget objective states that the LNP
planned to increase its strength, aimed at enhancing defined security in
counties of low manpower and buttressing police visibility, public reassurance
and maintain police standard operating services and assurance of its mandate.

The LNP is the principal enforcement entity of law in
Liberia, with specific responsibility for internal security; training of new
officers to interest the strength of the LNP, purchasing of toll truck and
other transport equipment to enable LNP patrols.

Experts says, there is need for more budgetary support to
enhance the workings of the police.

With the budget in five years, 2022, a year to Liberia’s
elections shows a deep decline in the allocation to the Police force.

In early January, Police Inspector General Patrick Sudue
told the senate Budget Committee that Liberia is currently disconnected from
the International Criminal Police Organization (Interpol) due to budgetary
constraints faced by the LNP.

He said, the headquarters of the Liberia National Police
has been without internet for more than six months. Therefore, the LNP,
according to him, the police are not able to stay in touch with other
countries.

He said, the
current LNP lacks the ability to motivate its officers of and the current breed
of police officers are working because of the passion for the police.

It can be recalled that in
September 2020, Col. Sudue wrote the House of Representatives seeking an
additional budgetary appropriation of US$6,317,831 for its operations in
FY2020/2021 to enhance the LNP’s capacity in combating crimes and maintaining law
and order.

He stated the LNP budget has
often not been adequate enough to fund the many line items and operational
activities of the LNP, including but not limited to fuel and lubricants for
vehicles and generators’ operations, purchase of uniforms and accessories to
ensure that police are neatly dressed, purchase of vehicles, repair and
maintenance of vehicles and other assets to enhance police response and travel
allowances.

Meanwhile
the Country Director of Prison Fellowship Liberia Country Director Mr.
Francis S. Kollie called on the Government of Liberia to increase
the Liberia National Police (LNP) budget in order to fight and
minimize crimes in the country.

Mr.
Kollie said crimes are on the increase in Liberia, and prison
facilities are overcrowded, posting dark clouds on Liberia’s images around
the globe.

Mr.
Kollie pointed out that based on the several human rights violations
reports by the United Nations on Liberia, Liberians at home and abroad are
under serious molestation and humiliation with less or no confidence by
foreign investors to invest in Liberia, neither to encourage tourists’
activities here.

The Stage Media takes a look at the national budget
allocation between 2016- 2022.

‘I Do not Know What Went on Behind my Back’- Rep Cole tells court...