Home Fact Check The Picture of Rihanna holding a baby is Old and not her... 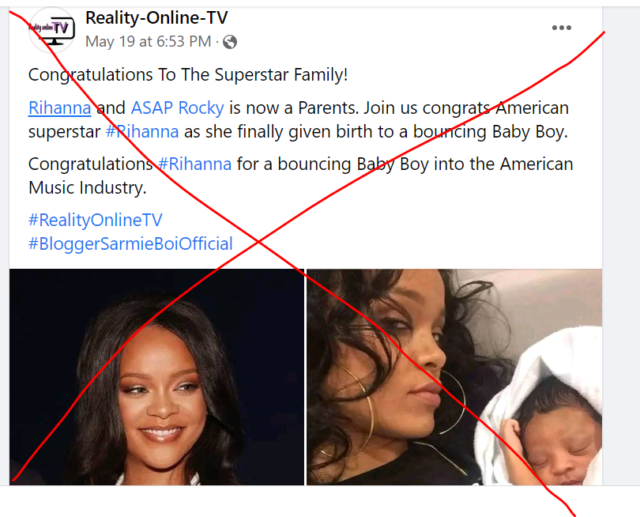 Claim: Congrats, to Rihanna and ASAP for a bouncing
baby boy

Verdict: False, the photos are from June 2014 and show
the star with her niece, Majesty, not her own child.

The sets of images published by Wow
News Media and Reality-Online-TV
purported to show the singer and entrepreneur with her first child attracted
many comments and shares.

Both photos were published on May 19. The
post by Wow News Media was shared 41 times, with 48 comments and 129 reactions.

While the Reality online post attracted
463 reactions, 136 comments, and 172 shares.

The photos are old; the couple has not made
an arrival announcement of the baby.

“Majesty x Aunty OhNaNa,” reads the caption on a June
2014 Facebook post, referencing a verse in her hit song “What’s My
Name.”

A reverse image
search for one of the photos circulating on social media led to this June
15, 2014 post on Rihanna’s verified Facebook page. “Majesty x
Aunty OhNaNa,” the caption says, referring to a refrain in her hit song
“What’s My Name.”

Another search led to this photo of Rihanna and
Majesty, which was posted on her page the same day.

Majesty, now seven, is the daughter of Rihanna’s cousin, Noella
Alstrom, but the singer refers to her as her niece.

This fact-check was also done by USA Today
and AFP.

Conclusion: Based on our research, the claim is FALSE. The photos in the post-show
Rihanna holding her niece in 2014. There is no evidence from legitimate news
agencies that Rihanna has unveiled the child’s image.