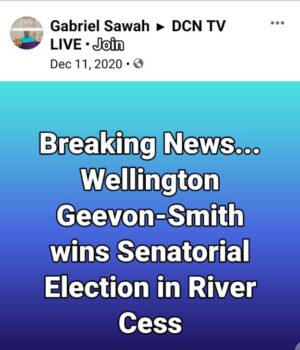 Claim: Social Media posts have claimed that Candidate Wellington Geevon-Smith is now Senator-elect of Rivercess County following the conduct of a recount in the area.

#Wellington Geevon-Smith Son: “Wow Democracy at Work. Congratulations to Hon. Geevon-Smith. Ahead of announcing the official result by NEC in the recount. Steve Tequah just call Senator-Elect Wellington Geevon-Smith to congratulate him a few minutes ago on his victory as Senator of Rivercess County. Congrats Chief go and served your people’s boss man! SEN 24 Confirmed………………….”

The Stage Media was unable to further verify the claim as to whether candidate Tequah called to congratulate Smith.

Factcheck: The Supreme Court of Liberia mandated NEC on February 24, to conduct a re-count of 104 out of the total of 111 polling places, as initially authorized by the Board of Commissioners of the NEC. The High Court said its decision was to ensure fairness and transparency in the voting process after Geevon-Smith’s closest rival, Steve Tequah, requested a recount of the ballots cast in 104 polling places in the country.

Though the recount in Rivercess County has been conducted in the 104 polling places the National Election Commission is yet to announce a winner.

But preliminary results show that Candidate Smith is narrowly in the lead.