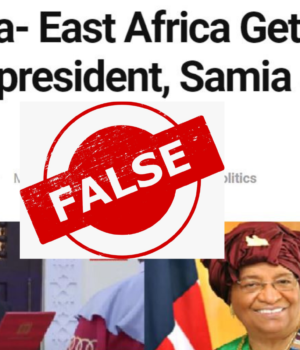 But how the claim by the daily stack up against the evidence? We checked.

East Africa consists of 20 countries including Tanzania, Kenya, Uganda, Rwanda, Burundi and South Sudan among others.

Liberia: Ellen Johnson-Sirleaf is the first elected woman president in 2005, she served as the 24th President of Liberia from 2006 to 2018.

Malawi: Joyce Banda; became Malawi’s first female president in 2012, stepping up from vice president to the position after the death of Bingu wa Mutharika.

Burundi: Slyvie Kiningi, Acting President from October 27, 1993, to February 5, 1994, when the incumbent President Melchior Ndadaye was shot together with 6 of his officials. After his death, Kiningi gathered 15 ministers to continue to govern the country.  Thus, technically making her the first female president on the continent.

Ethiopia: Sahle-Work Zewde, President (October 2018 – Present), is the first elected female President of Ethiopia. She took office on October 25, 2018, after being unanimously elected by members of the National Parliamentary Assembly.

More research will land you to the Africa Faith and Justice Network (AFJN) and She is Africa.

Verdict: True, that Suluhu Hassan is Tanzania first female president but she is not the first East African Female President

Is it safe to reopen schools during the pandemic?