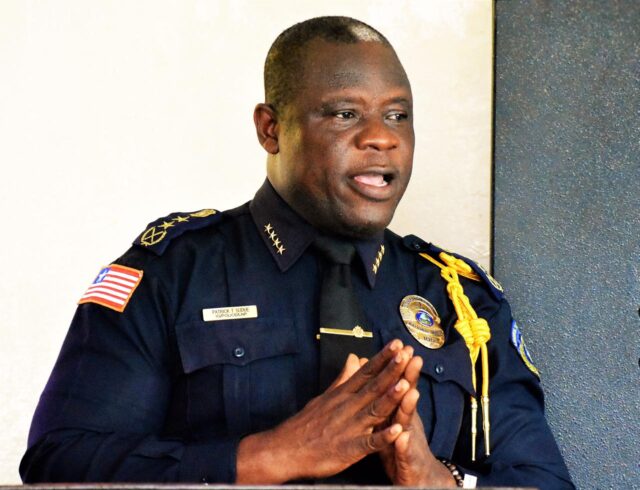 The Administrative Officer of the Zone Five Base in Joe Bar
says he did not visit the scene of the incident, but charged journalist Bettie
Johnson Mbayo, her husband Dr. Moses Mbayo and a relative with Felonious
Restraint, Disorderly Conduct and Terroristic Threats.

He was subpoenaed by the Paynesville magisterial court on
February 24, due to a plea made by the prosecution team to appear and testify
to the multiple offenses as contained in his charge against the defendants.

But, taking the stand during the last trial on Friday, the
investigator struggled to justify how he arrived at charging the defendants
with the crimes of felonious restraint, disorderly conduct and terroristic
threat when, in fact, he did not visit the scene during the day of the
incident.

According to him, he only got to know about the case at the
level of the police station after he had been called by a junior officer
(Inspector Flomo) who arrested the case.

“I only get to know about the case when both the complainant
and the defendants appear before me at the police station.”

With this, the defense counsels believe that the officer
acted on ‘hearsay’ and what he was told, hence, he charged the defendants with
the above crimes.

According to him, the defendants were charged with
terroristic threat because one of the defendants in person of Johnson Kerkulah
admitted removing his waist belt during the incident, but said it was not
intended for the lawmaker, but because same being a deadly weapon that poses
threat to Representative Melvin Cole.

On the crime of felonious restrain, he said it was
established that the defendants’ vehicle was parked in the driveway right in
front of the fence of Cole, restraining his movement and depriving him of his
privacy. Of the six persons’ statements taken, he also told the court that only
three persons were charged, while the other two, including Cole’s wife and
security, were released as they only arrived on the scene after the incident.

At the same time, Press union of Liberia, Vice President
Daniel Nyakonah says the police officer is not a credible witness because he
did not appear on the scene of crime to gather information to correspond with
the arresting officer.

Nyakonah further said that the zone five head officer
discharged the initial officer who investigated the case and analyzed to the
point of making a conclusion that the lawmaker was never assaulted, evidenced
by his clean white shirt.

“Being so conflicted at that point discredits him from
making independent analysis as a police officer in this matter,” PUL Executive
says. “In the absence of making an independent analysis, I think he was just
purchased by the lawmaker to come and provide a wrong explanation.”