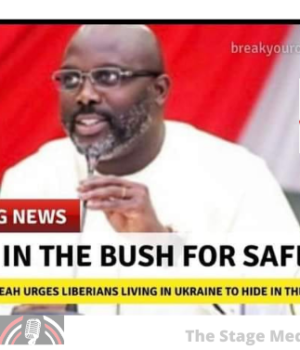 Claim: President George Weah urges citizens in Ukraine to hide in the Bush for Safety

Full Text: As the crisis between Russia and Ukraine heightens, Social Media users in Liberia are circulating a claim that the Liberian Government has urged its students to hide in the bush for safety.

Currently, there is an ensued crisis between Russia and Ukraine after Russia’s invasion of Ukraine began early Thursday morning, with shelling and rocket attacks on several major cities including the capital, Kyiv, and dozens of deaths.

Explosions thundered in the dim light before dawn, minutes after President Vladimir V. Putin of Russia cynically declared the start of a “special military operation” to “demilitarize” Ukraine but not occupy the country.

His announcement came as the United Nations Security Council held an emergency meeting, stunning ambassadors who had to deliver impromptu reactions to the rapidly changing events.

Hours before the attacks began, President Volodymyr Zelensky of Ukraine made a dramatic televised plea to the people of Russia, saying he wanted to speak to them directly after Mr. Putin had rejected his phone call.

He added that at no time such statement was said by President George Weah.

Also, on March 2, the Ministry of Information Cultural and Tourism posted on its Facebook page that the Government of Liberia is engaging in frantic diplomatic efforts to ensure the safety and wellbeing of all Liberians in Ukraine, which includes about 200 Students undergoing their academic studies.

“The Government, through the Ministry of Foreign Affairs, has requested the neighboring countries of Poland and Hungary to grant safe passage and humanitarian assistance to Liberians who reach their respective borders fleeing the ongoing Ukraine-Russia military hostility.”

The press release further that the Government of Hungary has granted all Liberian Nationals who will enter the territory of Hungary fleeing the Ukrainian Conflict temporary protection even without the legal Schengen Visa.

Conclusion: The claim that President George Weah urges Liberian students in Ukraine to hide in the bush is False.