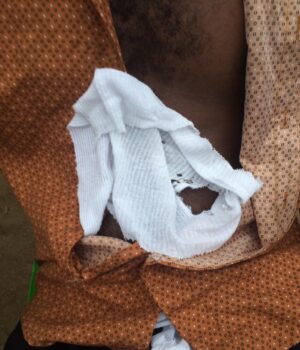 The three were beaten after representative Cole questioned
the parking of the journalist and spouse vehicle beside his fence.

According to him, outside of his fence was not meant to be a
parking lot for anyone.

The incident occurred when the trio went to sympathize with
a friend whose father had passed in Du-port road where representative Cole
currently resides.

When representative Cole approached the driveway where Dr.
Mbayo’ vehicle was parked at the edge of the lawmaker’s fence, his driver asked
for the doctor’s vehicle to be removed calmly,

Out of a sudden, representative Cole shouted, “You A** take
your vehicle from beside my fence, don’t you know who I am”?

The Doctor in return told him It was unfair for him to
intrude in the discussion with insult when two drivers are discussing a civil
matter.

Representative Cole disembarked his vehicle and said he was
being disrespected by the trio, therefore, he ordered thugs to beat them.

One of his workers named Ishmael along with others joined in
a tussled with Dr. Mbayo and ripped his underwear, shirt and trouser while St.
Simon Principal was also beaten, and his shit was ripped.

For Journalist Johnson-Mbayo she was kicked on her left leg
and sustained a bruise and wound.

Meanwhile, the case was taken at the Police Station, and
Officers of Zone-5 said the trio disrespected the lawmaker and requested their
lawyer to sign for them.

The police did not show interest in the order of
representative Cole to thugs to beat Journalist Johnson-Mbayo and the two
others.

Qatar Airway is not Presenting Gifts, the Message is False

No, National Agricultural Fair Was Not Held 13 Years Ago