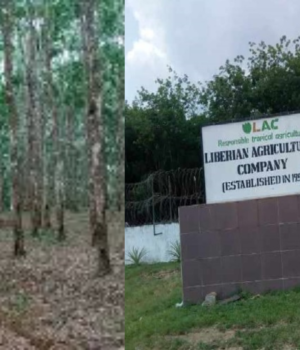 “I handled that case and made the ruling and there was a certain specific part we used to make our conclusion and that was Arcelor Mittal made an additional payment to their foreign workers in Liberia and whatever name AML called it, it was risk-benefit because of the situation of COVID-19; and therefore Liberian workers should benefit same,” Atty. Phil Dixon, Former Deputy Labor Minister.

Workers of the Liberian Agricultural Company (LAC) in Electoral District no.4, Grand Bassa County have begun a go-slow on the plantation over what they referred to as management alleged ‘refusal to pay workers risk-benefit.’

A source at the rubber plantation told The Stage Media (TSM) that all workers of the company have abandoned normal duties while others have blocked the main entrance of the factory complex, denying co-workers from assessing the site.

The factory is where the raw rubber materials are processed before it is exported out of Liberia through Buchanan port in Grand Bassa County.

Sources on October 2020 said workers of LAC through its Workers Union (LAWU) approached the management that those who risked their lives and worked during the height of the COVID-19 pandemic outbreak was entitled to risk benefits.

Since October last year, the source said a series of planned protest actions were to be carried out but were aborted due to negotiations between the workers Union and the company.

The workers have claimed that steel giant Arcelor Mittal-Liberia reportedly was paying its workers who worked during the height of the Coronavirus pandemic an amount of US$1,200 each as risk-benefit but LAC has allegedly refused to do the same.

The agitating workers claimed that the issue of risk-benefit is universal adding LAC should be mandated by the Government to pay them for working at the start of the pandemic in Liberia like Arcelor Mittal.

When contacted, the LAC Workers Union President Aloysius Kollie told TSM that since the workers advanced their demand, “there have been back to back negotiations with the Ministry of Labor, the General Agriculture and Allied Workers Union of Liberia and LAC’s Management but to no avail.”

“Since the workers raised their concern back in October 2020, we reached out to both the management of LAC and also the Ministry of Labor through the national union (General Agriculture and Allie Workers Union of Liberia) but the management told us to tell the workers to remain calm that they were going to intervene.

“We also asked the national union (GAAWUL) to take it up with the government through the Labor Ministry and we are still awaiting the result,” Mr. Kollie said.

Mr. Kollie added that “We have held series of meetings with the workers encouraging them to remain calm as we await a proper response from national union GAAWUL who is closely working with the government through the Ministry of Labor to at least compensate those who worked throughout the height of the pandemic,” he continued.

“As it is now, we cannot keep carrying the same message to the workers saying management says you should wait. It has been since October and we are yet to conclude.”

“We are waiting for the message that will come from the ongoing meeting with the Ministry of Labor and the General Allied Workers Union of Liberia,” Mr. Kollie concluded.

Mr. Harry Attoh, Human Resource and Administrative Manager of LAC was contacted via phone and text, but he did not respond to any of the inquiries.

Text Message to Mr. Attoh: Hello Mr. Attoh. I am Journalist TROKON WREPUE and I want to talk to you in connection to the ongoing go-slow action on the plantation Sir. We have spoken with LAWU already. We want the Management’s side.

Meanwhile, a telephone interview with Phil Tarpeh Dixon, former Minister for Man-Power Development, Ministry Labor, said that the payment of risk-benefit to company workers is a ‘Best Practice’.

“When I was still at the Ministry of Labor, we received a similar complaint from workers of Arcelor Mittal requesting for risk-benefit and we ruled in favour of the workers of AML.”

“I handled that case and made the ruling and there was a certain specific part we used to make our conclusion and that was Arcelor Mittal made an additional payment to their foreign workers in Liberia and whatever name AML called it, it was risk-benefit because of the situation of COVID-19 and therefore Liberian workers should benefit same,” Dixon clarified.

The Liberian Agricultural Company since its inception has been accused of allegations of bad labour practice, poor housing units for plantation workers including low salaries/wages and poor relationship with adjacent communities.

The report released February 21, 2019, alleged that residents of Grand Bassa County especially in electoral district #4 are being harmed by the operations of the multi-millionaire rubber company.

Scam Alert: Coca Cola is not Running a Survey