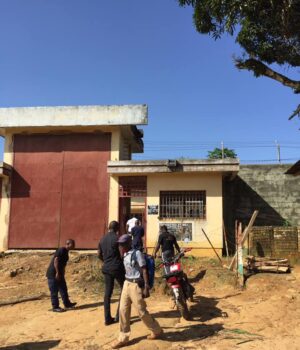 Friday, September 9, 2022, was a tough day for prisoners at the Grand Gedeh County Correction and Rehabilitation center.

According to The Stage Media (TSM) investigation, Eddie S. Tarawali, the Assistant Minister for Corrections at the Bureau of Correction and Rehabilitation, Ministry of Justice, reportedly came down hard on prisoners who are believed not to be members of the ruling establishment, Coalition for Democratic Change (CDC).

Our sources said an inmate was severely beaten by the PSU officers on the order of the Minister, thus putting him in a severe condition, adding, “He was taken to Martha Tubman Hospital in Zwedru where he sorted treatment.”

“In the prison yesterday, the Minister came here and said that he was conducting search and all the inmates in the various room submitted themselves to the search,” TSM, Source said.

“After submitting ourselves to the search, the next thing he (Tarawali) did was to stop everybody from eating which resulted to us eating at five o’clock while our breakfast usually comes by 12 and our main meal comes at times by 2 PM but he refused to allow us to eat on time.”

The source said, “He even ordered that nobody should go out. So we are denied sun bath. When he came, he ordered the PSU officers to beat on us till one of our friends went unconscious and was taken to the Martha Tubman Hospital for treatment.”
The source alleged their brutalization resulted from the Minister’s decision to eliminate those prisoners involved in politics against the CDC-led government in the cell.

“I am calling to give this information out so that people out there should know what is happening because he came and said that we are carrying on politics in prison, so those that are responsible for the politics, he wants to get rid of them; up to now, we are still under torture, no eating and they are beating some of our men down steps” the source added.

On the other side of the phone, our source sounded very frustrated and said,
“I only hide myself to give the information.”

The source added, “Some of us are here for a longer period so if we are getting this type of treatment today, then it is just better they kill us because we cannot spend 10, 15, 20, 25 years, some even more under this type of torture.”

When asked about how life is in prison, the source disappointingly said, “life here is too difficult, we do not even have a bathroom in the cell, we can toilet in buckets,

-now as I am speaking to you, we are even thinking about how to waste our mess because they can open the door for us to waste our mess in the bathroom, but the Minister has already released an order that they should not allow us to get out to waste our toilet which is a serious challenge.”

On health, the source said, “if we are sick here, we used our own money or call our family to send at times US$ 50 or 100 before we are taken to the hospital; there is no clinic here for us to get treated. These were some of the things that we requested to see the Minister, but when he came instead of him listening to us, he ordered that we be flogged.”

The source said the prison had not had rehabilitation for the last six years, which he described as a severe challenge.

Other prisoners were speaking pidgin in the background, having the same conversation as their colleagues, detailing their current situation.

“Eddie Tarawali go get a Master’s degree to come and suppress us? We now get a problem with it (we do not have a problem with it) but he should know that this will catch up with him; this is our country, Liberia, and for you to be violating our rights is what makes you powerful, keep it up” a prisoner remarked in the background.

The source said that even though their liberty has been seized, they should have some privileges, including sun baths, regular health checks, and other things that require of them as they serve their terms in jail but was quick to say, unfortunately, for them, everything has been taken away by Tarawali.

Minister Tarawali confirmed his being in Grand Gedeh but for a different reason.
When asked why; he said it was to clean narcotic drugs that had reportedly taken over the prison.

“I did not order the flogging of anyone, the cells are full of drugs, and I am working with the prison guards and PSU officers to clean up it,” he said.

The correction Minister said he had not neglected the prisoners as they had claimed.

According to him, during his visit to Grand Gedeh, he took toothpaste and other accessories to donate to the prisoners, but he did not say the quantity.

‘I Do not Know What Went on Behind my Back’- Rep Cole tells court...

False: CPP Has not Won Any County in Senatorial Election

Fact Check: This is not President Weah’s Palace