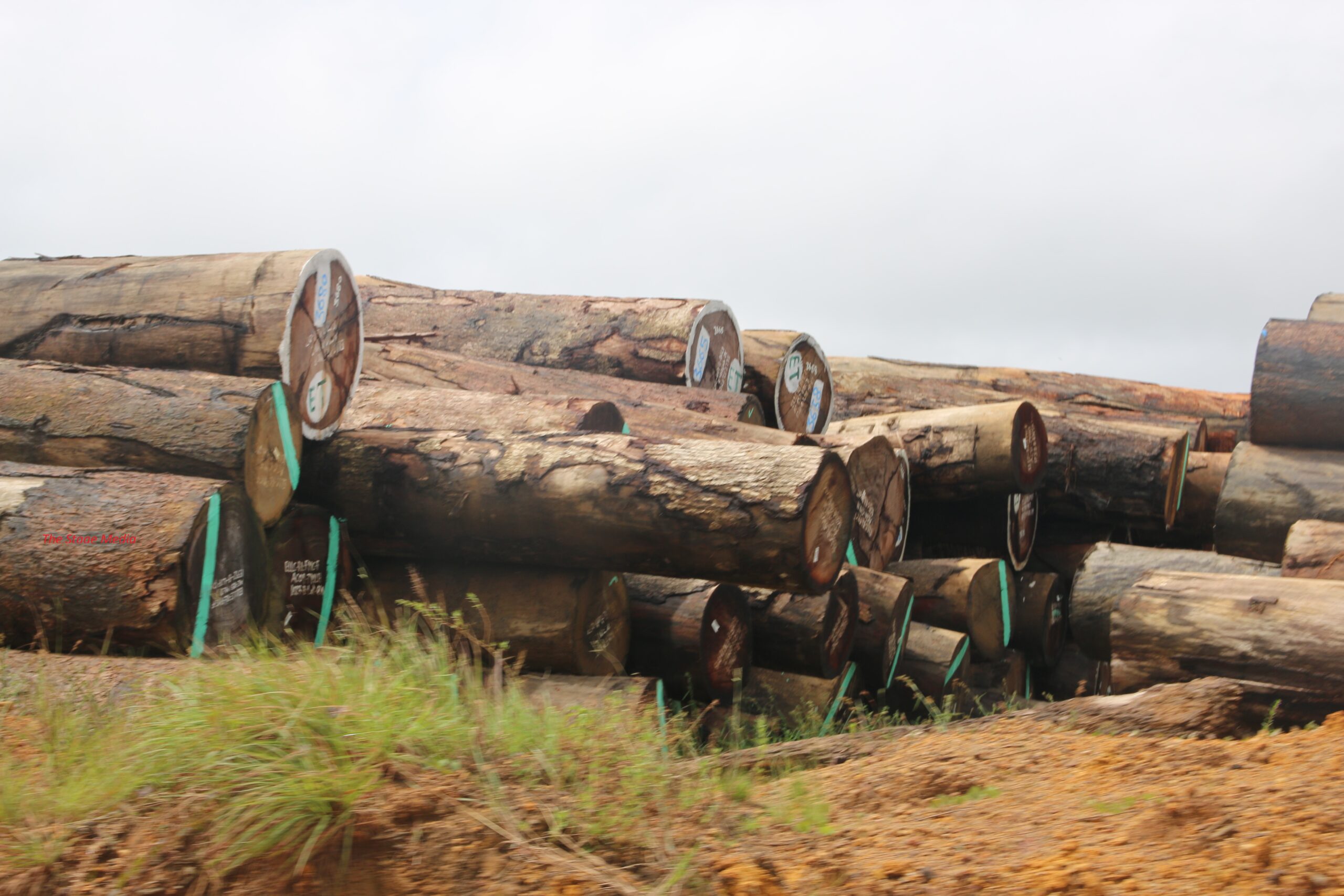 Since the cessation of war and hostilities in Liberia, logging operations, which provide the world’s wood and paper products, continue to fell the countless number of trees each year, raising forest-related greenhouse gas emissions.

Many of them act illegally to acquire forests, build roads to access more and more remote forests in poverty-stricken rural communities across Liberia.

Over the years, this has occasioned not only a heightened wave of deforestation, forest degradation, but in some cases, complete desecration of sacred traditional shrines.

Not only does logging result in deforestation but upland farming caused by Liberia’s traditional substance rudimentary rice production method, a growing number of forest resources get lost from the country holding West Africa’s largest rainforest in the face of increasing global warming.

Here, one of Liberia’s most controversial logging companies storms the dark-looking forest daily, felling all forms of trees and loading them onto lengthy trailers which takes them to the port of Buchanan, a stone throw distance away.

A logging company with controversial records, International Consultant Capital (ICC) has made it at the center of it all here with five trips each to the Port of Buchanan since day.

On each trip, between 8 and 10 giant side logs are loaded as the trailer can be seen dancing in the mud with villagers looking in dismay from tiny huts made of red dirt.

A trip deep into the forest at one of ICC’s logging sites, south of Waka Town shows no caution for the visible threat climate change and global warming pose to human existence.

An extensive chopping down of trees to the ground under the loud sound of gasoline-powered chainsaw oozing with smoke.

There is no sense of replanting or reforestation for all they take away.

Accompanied by a member of the community, I asked ‘sir, why are you just felling trees indiscriminately with no replant to replace what you are taking away?’

A huge, dark shirt-wearing man whom many of the local village workers refer to as “boss man” replied; “where are you coming from and who brought you here?”

Before I could reply, he started shouting from the top of his lungs “this place is not a radio station. If you want information please go to the head office”.

He continued: “I will not talk to you, go and ask the government”.

‘I am a journalist concerned about the manner in which you are operating here and I have come to ask questions. He then vowed I would not get any answer further.

An email sent to the management of the company detailing questions about its unregulated cutting down of trees and how it increases forest-related greenhouse gas emission, a major factor for global warming, did not get a reply up to now.

Locals here in District #2 are displeased with the environmental havoc logging has brought to their community.

“One soon morning you are sitting and the next thing you see is another trailer is passing, carrying logs to Buchanan to be sent abroad” a man identified as Old David said.

According to him “our community Forest Management Board has an agreement with these people” but he added, “They just don’t honour what they commit to the government that they will do in the community”.

Bob Kaduy, a youth in his later 30s believes the logging companies have failed to undertake any other “significant corporate social responsibility” in the affected community despite cutting down “dozens of trees daily”. “Our road is bad and we can’t see anything for all they are taking from our father’s land”.

Mamie Gardyu a wife with three children blames the company’s mass logging activities for a recent wave of high-speed winds that often destroy homes and food crops but said she does not blame the people (ICC), instead, the government.

Said Mamie: “ We never used to see this kind of wind blowing here before, but since they started cutting down the forest and sending the wind blows like you never hard and at times we are left with no place to sleep.”

She warns that if nothing is done “our husbands will have no more farmland” and “we will die in hunger because what they are doing to the forest is not good.”

International Consultant Capital has a community forest management agreement with the locals which mandates the company to make payments to the community, help with school, healthcare and road projects.

A review of ICC 2007 articles of incorporation filed with the Liberia Business Registry shows that by that Mr. Mulbah Willie was the sole subscriber to purchase all of the 100 no par value shares the company was authorized to issue.

On February 18, 2009, ICC transferred 92.5% of its shares to the Liberian Wood Industry, INC, raising questions in a due diligence report about the relationship between ICC and another logging company Geblo Logging that won a bid for a forest management contract.

Wantoe, a former presidential candidate, is an ally of the ruling government.  He endorsed George Weah’s presidential bid in 2017 and was a former chairman for the governing Congress for Democratic Change (CDC) party.

Liberia has over the years failed to ensure sustainable forest management or hold companies responsible for damages to the natural environment.

The least of all standards- ‘reforestation’ that could allow accelerated development of forest structure, species composition and canopy that provides benefits including wildlife habits, clean and abandon water, carbon sequestration, forest wood products for consumers, forest recreation opportunities and maintenance of the soil has not even be demanded from logging companies.

One report after the other has found that top-level politicians, government officials either have shares in these logging companies or assist them to acquired forest management contracts.

The report said, “despite a ban on Liberian politicians owning companies with logging contracts, powerful government officials such as former Speaker of the House of Representatives Alex Tyler, and representatives Moses Kollie and Ricks Toweh own logging companies”.

Despite these excesses, the Liberian government in 2017 gave secret tax breaks to loggers to the tune of nearly US$13 million, a move condemned by Global Witness.

In 2017, the Liberian government signed a treaty with the European Union to promote trade in legal timber (Voluntary Partnership Agreement), while Norway signed a US$ 150 million deal with Liberia in 2014 for promoting community forestry and conservation.

Liberia’s Forestry Development Authority (FDA) is a semi-public autonomous corporation created by law to sustainably manage and conserve the forests and related resources of the country for the benefit of present and future generations.

When contacted, The FDA could not give any clear position on the massive logging activities ongoing across the county.

The communications director- Shelton Gonkerwon said loggers are mandated to only cut down trees that are matured according to the size of the diameter.

“Logging, I don’t think they do reforestation, but FDA people at the logging site to ensure that they do what is required under the law.”

Gonkerwon declined to comment on who should take responsibility for the wanton destruction of forest resources across the country.

Recently, Liberia submitted its revised Nationally Determined Contribution (NDC), a set of planned actions according to the Environmental Protection Agency the county intends to take to Curb Greenhouse Gas Emissions.

“The Environmental Protection Agency of Liberia will ensure all sectoral line ministries and agencies of government will combine efforts to drive Liberia’s national climate agenda for the good of Liberia and for the rest of our one world, based on the Monrovia Declaration on Environment and Climate Action of June 2, 2020, in which the heads of sectoral agencies and ministries of the nine NDC sectors committed to collaborating on the implementation of the NDC,” said Prof. Wilson K. Tarpeh, Executive Director of Liberia’s Environmental Protection Agency.

Deforestation is greatly impacting the lives of the people and animals where trees are cut, all across wider Liberia.

The forest-related greenhouse gas emission into the atmosphere averaged 51.5Mt per year over the last decade (between 2010 and 2020) as a result of tree cover loss in Liberia.

Liberia’s forests host a significant amount of animal and plant classes, and deforestation resulting from logging threatens the survival of such species.

Thousands of Liberians depend on forests for subsistence and income—many of them among the country’s rural poor.

The continuous cutting down of trees deprives the forest of portions of its canopy, which blocks the sun’s rays during the day and retains heat at night. That disruption leads to more extreme temperature swings that can be harmful to plants and animals.

Note: This story was produced under the NAREP Climate Change Media 2021 fellowship of the Premium Times Centre for Investigative Journalism.