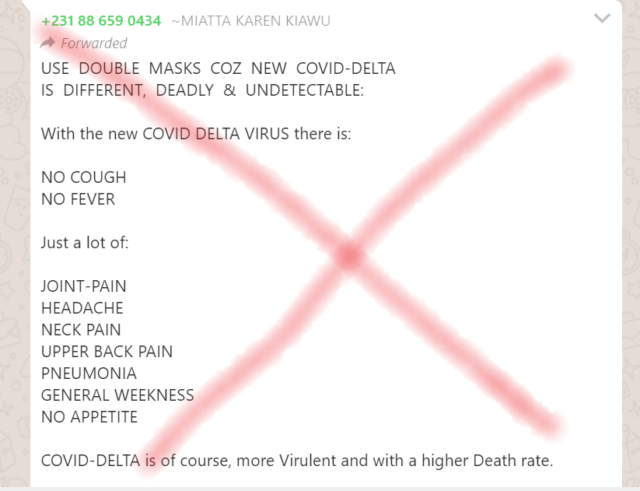 The recommendations to protecting oneself from the COVID-19’s Delta variant are the same as the earlier variants.

A social media post going viral on the internet contains several false and misleading claims on the Delta variant of COVID-19, the highly infectious, new strain of the novel coronavirus that is raising alarm all over the world including Liberia.

The post starts talking about the “new” symptoms of the Delta variant and then claims that it has a higher death rate. The post also talks about the effects of the variant on people and also claims that it gives more false positives.

We found that while some advice given in the post was in line with the health ministry’s guidelines, several claims made in the post were false or misleading.

The viral post is titled, “USE DOUBLE MASKS COZ NEW COVID-DELTA IS DIFFERENT, DEADLY & UNDETECTABLE”.

“With the new COVID DELTA VIRUS there is:

Just a lot of:

COVID-DELTA is of course, more virulent and with a higher death rate,” the post says.

Verification: The Delta variant (B.1.617.2) contains mutations from two separate variants and was first declared a global concern variant in May by the World Health Organization (WHO). Studies say the variant is 60 percent more transmissible than the Alpha strain identified in the UK.

CLAIM 1: Symptoms of Delta Variant of COVID-19 Don’t Include Cough and Fever

The first half of the post claims that the Delta variant has new symptoms and some symptoms of the original strain like the cough and fever are no longer seen when a person is infected with this variant.

While it has been found that the Delta variant has some new symptoms, it is not true that fever and cough are not reported because of this variant.

Data collected from the United Kingdom by app-based Zoe Covid symptom study suggested that headaches, a sore throat and a runny nose are the most common symptoms now. Delta variant, which has spread to 98 countries now, comprises 91 percent of the new cases in the UK.

According to the data, the classic COVID-19 symptoms like cough is now the fifth most common one and loss of smell didn’t make it in the top ten.Some of the other symptoms mentioned in the viral post, such as joint pain, back pain, etc., were noted during the previous variants and are not unique to the Delta variant.

Data released by Public Health England (PHE) in June suggested that the Delta variant is associated with a higher risk of hospitalization compared to Alpha.

According to the PHE data, 117 people out of 92,056 people infected with the Delta variant in the UK had died up to 21 June. That puts the fatality rate – 0.1 percent – lower than other variants.

However, PHE said that it was still too early to say if the variant is deadlier than the other variants and has said that increased cases of hospitalizations could overwhelm the system and make the disease worse.

Some of the other symptoms mentioned in the viral post, such as joint pain, back pain, etc., were noted during the previous variants and are not unique to the Delta variant.

Dr. Alieu Swaray of the Liberia Medical and Dental Council said the claim that the Delta variant was giving false positives was false.

he said the coronavirus genomes are sequenced around the world and “no mutant variant could escape the double gene test”.

“People have to understand that the sensitivity of an RT-PCR test is 70 percent at best and the maximum viral load in the nose and mouth is one day before the symptoms start showing and then reduces gradually. When individual delays taking the COVID-19 test, the virus would have travelled deeper inside the body and as a result, one might get a negative result from an RT-PCR test,” Dr.  Swaray said.