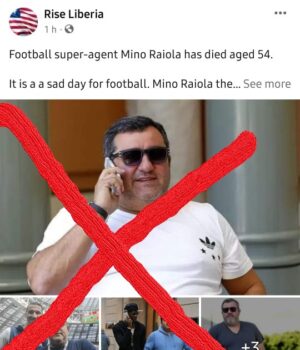 Claim: Mino
Raiola has passed away due to an illness

Full Text: Mino Raiola, the agent, who manages some of the
biggest football names such as Paul Pogba and Zlatan Ibrahimovic.

Social Media Users widely reported on April 28, 2022, that
‘super-agent’ Mino Raiola had passed away due to an illness.

While they did not divulge the details, this shocking
development did trigger a series of posts by media across the world including
posts from two journalists in Liberia posted on social media.

Also, there are several other media outlets that posted
about his death, having deleted their posts now.

Who is
Mino Raiola

He is also one of the top agents who are responsible for
brokering some of the biggest deals in football. Reports claim that he managed
about 73 players.

As per a Forbes estimate last year, the 54-year old’s
personal wealth is believed to be a whopping £62 million. It is believed that
the Italian earned as much as a staggering £20 million after brokering the then
world-record transfer fee of Pogba’s £89 million deal from Juventus to
Manchester United in 2016.

The claim was debunked by Mino in a tweet, “Current
health status for the ones wondering: pissed off second time in 4 months they
kill me. Seem also able to ressuscitate.

Also Tancredi
Palmeri beIN Sports correspondent on Twitter said, I deleted tweet about Raiola. It wasn’t speculation or “run to be first”. I’d never do any like this on such matter. News was broke by TgLa7, most rated Italian tv news; confirmed by all Italian biggest media.

But I did tweet wrong too, therefore I am mortified and apologise”

The claim was fact checked by other media outlets including Irish Mirror , India Today and football.london  who previously published an article of Raiola’ death.

Following the tweet by Raiola’
saying that he was annoyed with the way the shocking allegations moved around
regarding his health.

It is safe to say
that the football agent is not dead as his fans and family  hopes he recovers soon and continues to carry
out some of the biggest deals in football.

True, Associate Justice Home was Petrol-Bombed But, No Vehicle Burned

Fact Check: Did President Weah get his facts on Education in 2021 SONA?