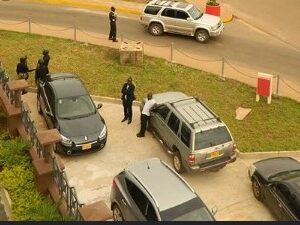 The ELWA Junction Beatification Park was constructed in June
of 2013, with its worth of over $US40, 000.

Upon the dedication of the park at an elaborate event, Former
President Ellen Johnson Sirleaf suggested that the same be taken to other parts
of the Township.

Later in 2015, the Du-port Road Junction Beautification Park
which cost roughly $US50, 000 was constructed with funds from the National
Social Security and Welfare Corporation (NASSCORP).

Those parks, in the
words of former Paynesville City Mayor, Madam Cyvette Gibson were, “Meant to provide
employment opportunities for residents, provide displaced street hawkers a
habitable location for them to sell as designated by the Paynesville City
Corporation and most importantly provide green spaces that offer great benefits
to mental health and psychological well-being of the residents”.

Unfortunately, both parks were used as garbage sites in less
than five years of their constructions and later demolished by the Ministry of
Public Works, leaving the sole purposes of the areas In limbo.

A few weeks back, residents and by-passers saw earth moving
yellow machines unearthing over USD90, 000 worth of parks; this raised concerns
for them.

In a quest by our Investigative Reporter to get the Former
Mayor of Paynesville, Madame Cyvette Gibson, to explain why the parks were
short-lived, she could not be reached, as messages sent to her via social media
were not viewed by her.

Unconfirmed reports have it that she has not been in the
country in recent months.

Our reporter gathered also, that the Municipal Government of
Paynesville under her watch “didn’t seek Public Works’ advice before carrying
out the constructions, the Ministry of Public Works said, but due to her
absence, she could not respond to the inquires.

The current administration of the PCC headed by Madame Pam
Belcher-Taylor was then requested to provide documented narratives that led to
the construction of the parks, of which the Public Relations Officer said, “We
met the parks constructed when we took over the PCC and there was no turning
over ceremony of projects’ documentations by the past regime; at such, we have
no information about the constructions of the parks.”

Responding also to citizens’ quarrels of the “PCC being among
a list of government institutions that waste taxpayers’ money on projects that
make no direct or indirect impacts on the citizens”, Jeremiah Diggen expressed
empathy with the citizens’ concerns, adding, that the current administration of
the PCC cannot, however, be held in contempt for the actions of Gibson’s
administration.

Digger indicated, “Perhaps the past administration was not
thinking there would have been an expansion of the road; making the parks
incompatible with the road expansion.”

The National Social Security and Welfare Corporation
(NASSCORP) was then contacted to give strategies they have installed to avoid
the destructions of projects they fund.

Responding, the Public Relations Coordinator of NASSCCORP,
Halaword Yabah promised to do some follow-ups on the projects in question
before responding, but could not meet up to said promise, saying, “I am busy
with office work.”

Some citizens however expressed disappointment on the part of
the government for not coordinating and considering proper measurements before
carrying on the construction of the parks.

“The money they wasted on the parks could have been directed
to the health sector, but I am happy that the huge dumpsite that was before us
in the form of a park has been completely removed” Sam Naigba, a Money
Exchanger at Du-port Road Junction said.

Speaking also, Solomon Daykay, a Jewry seller at the ELWA
Junction said, “The government’s actions towards the citizens is because of
citizen’s low mindset.”

“It is a waste of
money to build and destroy public projects in a few years.”

Not only Solomon Daykay is angry about the demolition of
those thousands of United States Dollars’ worth of projects.

Adama Dempster who is
the Secretary-General of the Civil Society Human Rights Advocacy Platform of
Liberia is also mad at the action of constructing projects which are
short-lived.

He termed the situation as “Unfortunate”, saying, “The
construction of the parks were not properly planned, at such, making it a waste
of public finances.”

Dempster squally placed the blame at the feet of the Liberian
government for appointing people into public offices based on ‘party-line’,
instead of ‘competency’; something he said is a serious problem and has caused
a lot of bad leadership decisions that people are not accounted for.

“And you see, it is difficult to advise the government
because, at the end of time, the government will still do what they want to do
without adhering to the pieces of advice given them,” he said.

Gloria
Wleh is a CENTAL Investigative Journalism Fellow and reporter of The Stage
Media (TSM).

This
article is made possible through the National Integrity Building and
Anti-Corruption (NIBA) Program implemented by CENTAL with funding from the
Swedish International Development Cooperation Agency (SIDA) through the Embassy
of Sweden.

Did 82 Percent of Liberians Agree to Transitional Justice?