Home Fact Check No, Ghana has not Introduced uniforms for Teachers, But, 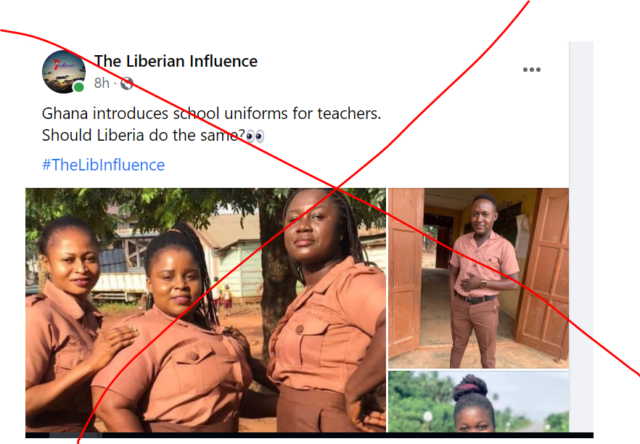 Verdict: The Ghana Education Service (GES) denied reports of introducing new uniforms for teachers in public schools, and says the social media circular is FAKE, but, it was an initiative by a group of teachers.

Full Text: The Liberian Influence, a popular blog in Liberia posted on its social media page that Ghana introduces school uniforms for teachers.

The blog requested comments on if Liberia should do the same?

“Ghana introduces school uniforms for teachers. Should Liberia do the same?”

Verification: A Reverse Image search showed that the story was previously reported by Opera News but the article was debunked by the Ghana Education Service on April 10.

GES’s Facebook page posted “DISCLAIMER, GES is one of the largest Gov’t agencies in Ghana. We employ more than half of all Gov’t employees. If we want to introduce uniforms for teachers, we won’t do that through social media and over the weekend. In this era of unionized labor, GES cannot introduce a uniform for teachers without engaging the teacher unions. DISREGARD THIS FAKE NEWS.

Though many see the post as a government own to provide teachers with uniforms the story is relative to teachers who believed the initiative was nice and threw their support behind their idea.

It has rather turned out that, the initiative was a self-initiated one by a section of teachers in the Ahafo Ano North District.

Conclusion: The claim that Ghana introduced Uniform for Teachers is False but, it was an initiative by a group of teachers in the Ahafo Ano North District in Ghana.