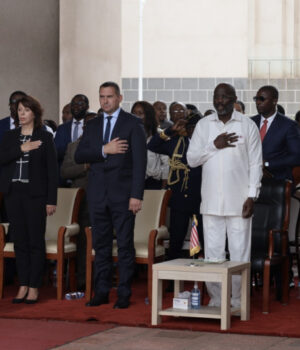 President George Manneh Weah, on September 13, commissioned the Work Permit Digitization System at the Ministry of Labor, stating that “it’s a milestone achievement that enhances modernization of government operations for better efficiency and greater productivity.”

But the contract between the Government of Liberia and Cetis, a graphic and Documentation Services Company of the Republic of Slovenia likely a fraud and unofficial.

“The contract is not official. For the house to know means it must be presented and ratified by the house but nothing about it has been discussed by the house.”

This contract also covers fuel supplies, maintenance, and insurance of all equipment and vehicles, as well as salaries and daily allowances for the entire five-year duration of the project, according to the Executive Mansion.

CETIS, on the new permit, said the contract offers the government additional income (tax revenue) for financing new projects for the development of Liberia.

The functions of labour inspectors are to:

a)  Secure the enforcement of:

i) this Act, including any regulations made under it;  ii) minimum wage orders; and

(1)  employees’ contracts of employment; and

b) Supply technical information and advice to employers and workers concerning  the most effective means of complying with the requirements of this Act;

c)  Investigate complaints from workers received by the Ministry and referred for  further investigation; and

d) Perform such additional functions as may be provided for in this Act and as may be prescribed.

CETIS is currently usurping the functions of the labor inspectors.

What is In for the Company?

The work permit is issued in the following categories: Alien citizens US$1,000, ECOWAS citizens working in the informal sector US$100, and Gratis (NGOs, foreign government contractors, and other humanitarian organizations) US$200.

CETIS was contacted via email, but they declined to reveal the contract and recommended the three institutions.

“CETIS LIBERIA is the project contractor for the new Work Permit Digitalisation Project in Liberia. Due to NDA, we cannot reveal any details of the contract.

“Kindly contact the Public Procurement and Concessions Commission (PPCC), Ministry of Labour, or Ministry of Justice for more information.”.

The Ministry of Labor boss  Charles Gibson declined in response to an inquiry {If he does, we will update this article}.

Gibson 2021 broke his confirmation nightmare after being denied for other positions twice, with issues surrounding his character being key for those denials.

Kortu Nyandibo, Director of Communication, says he has no knowledge of the contract and can not comment.

“I have no document and no knowledge of the contract and there is nothing I can say,” Kortu told TSM.

The PPCC has yet to respond to our inquiry a week after Communication officer Nathan Bengu said, “I think the MOL should be the custodian of such information.”

FrontPage Africa reported on the digitalized Residence and Work Permits in which sources familiar with the development informed the paper of an alleged attempt by the Labor Ministry to favor one company in the bidding process.

We checked the PPCC website and the bidding session, but nothing on CETIS was found, and the Press Director Bengu is yet to respond to inquiries from TSM.

Agriculture was Underscored in 2021 SONA, but See its Allotment

Constant Sex Kills Covid-19, No, the Claim is False