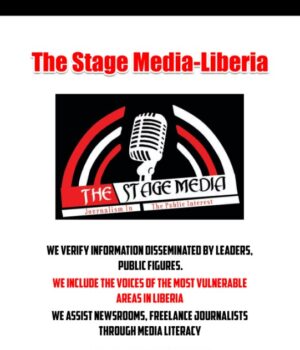 As 2022 draws closer, The Stage Media (TSM) is reflecting on some of the top feats achieved this year and when we recount, it won’t be overselling to say it has been a lot but with challenges.

in 2022 TSM will be entering its second year in August since it was established in 2020 when the Covid- 19 pandemic hit with a surge of cases in Liberia.

Despite the surge in cases, we have achieved major milestones and thanks to a dedicated and committed team, and  donors.

When TSM was founded, our aim has been tacklin misinformation and disinformation in Liberia and as the first Fact-checking media outlet, we gradually involved human interest stories, data analysis and investigative stories etc.

If you have time, read some of our amazing works on fact checking stories; the National Investment commission claim on investments growth and when the Liberia Petroleum for Refining Corporation building was dedicated, we fact-checked a claim that it was the first Administrative construction

President Weah in his Annual Message was also fact-checked and we found out there was a claim of exaggeration; understatement and misinformation.

When the National Transport Authority Driver was hit, there was a claim that he was shot.

A few moments for TSM in 2021, was when Premium Times and Africa Check trained Liberian Journalists in fact-checking, through a partnership.

Did you also read our explainer on the invincible park; and a motorcyclist who was wounded by acid but could not complete the treatment because of the increased bill.

During the height of Covid-19, facemasks made locally helped citizens combat coronavirus and despite the surge, Journalists in Liberia also explained their economic woes including old folks, market women and persons with disability.

Electricity remains a major problem in Liberia, and in Brewerville, a project that was to be completed in two years is yet to be ended.

Do you know that we used the FOI to ascertain Senator’s assets and it was established that they escaped accounting for their wealth?

When we first established TSM, another major investigation was on the pollution of four communities by Cemenco, watch the full documentary here.

How we change the Reporting Narrative

Verifying information as a journalist is one of the responsibilities whether the claim was made by a politician, journalist or a public figure. Our platform has depth in an investigative documentary, data journalism which is in the public interest. At the same time, ensuring that journalists in Liberia engage in fact-checks, data journalism.

You may know that media organizations have faced great financial difficulty due to the Covid-19 pandemic. This is why support from donors who believe in your mandate and provide financial support must be acknowledged and appreciated, for, without them, many would have gone under including TSM.

TSM’s story of survival through the height of the pandemic last year and subsequent successes in 2021 is, for instance, not complete without a mention of the aid provided by Premium Times Centre for Investigative Journalism.

We collaborated with Dataphyte Nigeria and the Press Union of Liberia in 2021.

The Global Investigative Journalism Network (Africa) additionally has provided technical support to the work of TSM.

We would like to say that the past year has shown that partnering with development organizations can set a pace for a new media institution like us in achieving institutional goals.

TSM report this 2021 was read and thanks to social media who have helped in circulating our stories far and wide.

Our readership has been fluctuating due to the Covid-19 and we would like to say that since Fact-check and data Journalism is apparently new to Liberia, it may take time to peak.

When we were established in 2020, it was a very rocky start, we were only three and despite during Covid-19 surge, we continue to tackle misinformation and disinformation around the pandemic to help build public confidence in Covid-19 information.

We can say despite little or no funding when we started until being rescued by PTCIJ, our team grew to seven and there were major hurdles, but our team remains steadfast and endured to date.

As one of the partners may say, this is a learning curve for TSM and there are structural gaps with our hope that in 2022 these gaps are addressed, and team members learned from experiences whether good or bad.

As we move to 2022, we expect a huge stage to be set for journalism in Liberia, in ensuring that more investigations are done to hold the powerful accountable and to have a more hands-on approach that will boost the efficiency and productivity of journalism in Liberia.

False, This Bridge is Not in Ghana