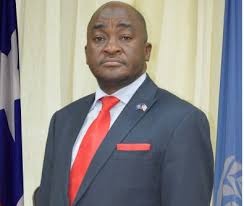 There has been a claim on social media that the US Government through the office of US Secretary of State Mark Pompeo had threatened to arrest Liberia Foreign Minister, Dee-Maxwell Kemayah if he enters America.

Claim: The Chief of Staff to the office of America’s Secretary of State, Mike Pompeii has informed some Liberian authorities that Liberia Foreign Minister Dee-Maxwell Kemayah Sr. Will be arrested if he enters America. My source who is based in Washington DC said Mr. Pompeii’s chief of office staff made the statement to some key Liberian gov’t officials, including a lawmaker from Montserrado County. The US official noted that Minister Kemayah has a outstanding criminal allegation against him in the US and he must be allowed to face criminal investigation. “This is the main reason since Minister Kemayah got appointed he has not come to the US on any official visit or even a private visit. He will be arrested once he enters the US soils,” my source stated. “This is embarrassing for our country foreign policy and the entire country”; my source indicated, We have been calling Minister Kemayah since yesterday to get his side of the story but he has refused to answer our calls… Investigation continues…

According to the US Embassy in Monrovia, it is aware of no such communication to Liberian authorities regarding Foreign Minister Kemayah from any office of the U.S. Government.

Please also note that it is Secretary of State Mike Pompeo (not “Pompeii”):  https://www.state.gov/secretary/.