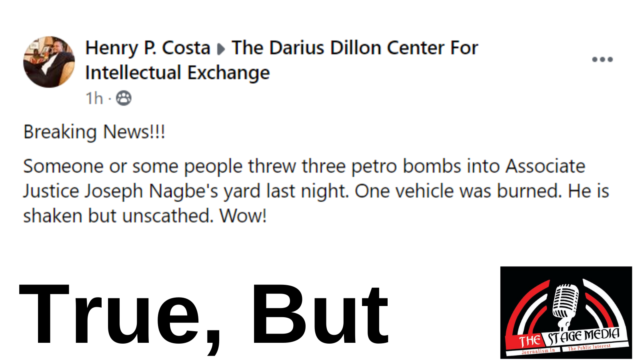 The Facebook account “Henry Costa ” posted a publication online today, March 11, 2021, claiming that Associate Justice Joseph Nagbe’s home was attacked by Petro-bomb and one of his vehicles got burned while Justice Nagbe is not wounded.

Someone or some people threw three Petro bombs into Associate Justice Joseph Nagbe’s yard last night. One vehicle was burned. He is shaken but unscathed. Wow!”

At the same time, the claim by Costa that one vehicle got burned is False. We couldn’t verify the claim that the petrol bombs were three.

We verified with Justice Nagbe who confirmed that though no one got wounded, there was no explosion and no vehicle got burned.

“Nobody got hurt, there was no explosion and how did Costa know that the Petro bomb entered my home, we can’t live like this, disagreement shouldn’t reach violence, we have gone through crises for 14 years, this needs to stop,” Said Justice Nagbe in an interview.

Please Note: We cannot confirm if accounts of the commenters are valid and we cannot also confirm if the incident is the result of the Supreme Court writ of prohibition issued by Justice Nagbe on the certification of Senator-elect, Lofa County, Brownie Samukai.

It can be recalled the Supreme Court of Liberia temporarily halted Samukai’s certification by the National Election Commission (NEC).

The court’s decision against Samukai, of the Collaborating Political Parties (CPP), was triggered by a Writ of Prohibition filed March 2, 2021, by O’Neil Passewe, chair of the Movement for Progressive Change.

Passewe asked the court to halt the certification of Samukai because he has been convicted by the Supreme Court for the crime of money laundering.

Samukai received the most votes in the December 8, 2020, Senatorial election. Of the 11 candidates who vied for the Lofa County senatorial seat, Samukai received 20, 431 votes, followed by Independent candidate Cllr. Joseph Jallah with 13,968 votes.

This story will be updated when the Liberia National Police verify the claim on the number of petro bombs.