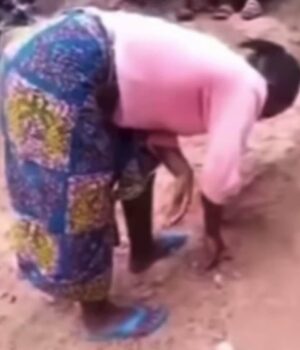 Social media posts, including media stations, Facebook, and Twitter, say a woman in Nimba was unmovable when she tried picking up L$100.00 from the ground.

Beware of this information, it is False.

After interviews with Journalists and Eyewitnesses, TSM has concluded that the video is False.

The Liberian Influence- a social blog posted on Twitter, “Wahala in Nimba! A woman tried to pick up a $100 bill and has been stuck in the same position for over 30 minutes #TheLibInfluence

Several other social media users posted the incident on the claim that the woman was stuck.

To verify this information, a Medical Doctor who asked for anonymity said, the lady has a psychological issue and she was not stuck to the ground, “Her condition is psychological and not Spiritual.”

Journalist Railey Guanbeh of Voice of Gompa said the woman returned from Guinea and has been loitering the City.

He spoke with neighbours who confirmed that the woman has a mental problem with her behaviour.

“She was seen with money in her hands. She would drop the money and pick it up. She did this several times for several minutes in no time, a crowd began gathering based on her repetitive action.

“When the bike boys got there, she bent and didn’t get up for a moment. This was when they started videotaping her claiming that she got stuck picking up someone’s money that dropped on the road.”

The journalist said the woman lady later got up and started moving around aimlessly.

According to the Medical Doctor, the woman is diagnosed with a catatonic phenomenon called Posturing in Psychiatry.

“Catatonia is a state of apparent unresponsiveness to external stimuli and apparent inability to move normally in a person who is apparently awake. [1] There are 3 types: (1) catatonia associated with another mental disorder (catatonia specifier), (2) catatonic disorder due to another medical condition, and (3) unspecified catatonia.

Liberia: Survival of the Fittest – Story of Artisanal Rock Crushers

No, President Weah Did Not Mention Robertsport Road in SONA