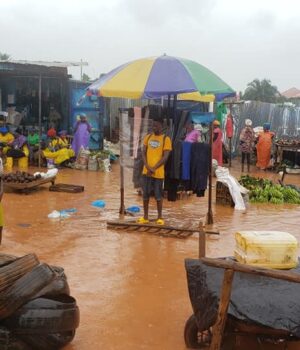 Several market women have expressed dissatisfaction over the government of Liberia’s decision to relocate the commercial Red-light market to Omega.

The market women in separate interviews said the decision was done as a result of poor planning especially during the outbreak of the third wave of the COVID-19 pandemic.

Even though the relocation of the Red-light market has long been in the pipeline, as far back as the Ellen Johnson Sirleaf regime, the marketers believe that the government needed to take a lot of things into consideration before the relocation.

According to them, such abrupt relocation by the government has significantly led to huge profit loss just over the course of days.

The marketers named toilets, warehouses, and garbage disposal sites as some of the challenges heavily faced in the Omega market.

Ma. Lorpu Garteh, 44 years, who sells garie, sugar and flour, told The Stage Media (TSM) since the relocation, she has not been able to effectively sell to provide for her family.

She said the government was not able to provide space for sellers leaving them run in confusion looking for spots in the muddy Omega area.

Lorpu said “the government decided to take us from red light to Omega market has really affected me for the past three days. I have not been able to realize the profit I used to make from my goods because people are not buying at the Omega due to the deplorable condition and limited space.”

Ma Sarah Cooper who sells vegetables (cucumbers, apples and bananas) said her fruits were damaged in the wake of relocating from the red light market to Omega.

Ma Sarah, age 33, said she could not afford to put her daily Susu as a result of the relocation.

She accused the police of being the reason why her fruits were damaged.

“During the time we were told to leave the market, we never had proper understanding so the next day we went back to sell in Red-light market and then the police people came running behind us,

While trying to run with my wheelbarrow, the tire burst and all my cucumbers apples and bananas fell in the mud and everything spoiled so I could not put my daily Susu for two days,” Ma Sara said.

Another marketer, Madam Louisa Pennie who sells bitter ball, peppers and okra also explained that she couldn’t sell her goods because she has no spot at the new market.

For ten years 50 years, Pennie has been doing this business and the new environment will take her time to adjust.

Elizabeth Gweh, President of the Redlight marketer’s association told TSM that even though there was an agreement reached to relocate the marketers, but such action should have been taken during the dry season.

Madam Gweh said she understands the difficulties but strongly believes that it is going to take some time for marketers to fully adjust.

She is requesting all marketers to remain peaceful and law-abiding as she believes the government is doing everything possible to properly carry out some developmental work in the shortest possible time.

“for me, I know from the beginning it will not be easy for us to get used to the area, so I just want to encourage all my friends to obey anything the government say and I believe they are also putting something good things together so we can be able to sell.”

I will Stop Selling

For her part, Oretha Flomo disappointingly told TSM that she will stop selling for some time until she really finds her selling spot.

Mrs. Flomo, 38, sells used-Jean trousers and t-shirts, she said the abrupt relocation by the government has significantly led to huge traffic on the road leading to the Omega market hall.

“Government must have put some mechanism in place before successfully removing them from their comfort zone.”

No, Covid-19 vaccines do not contain magnetic microchips